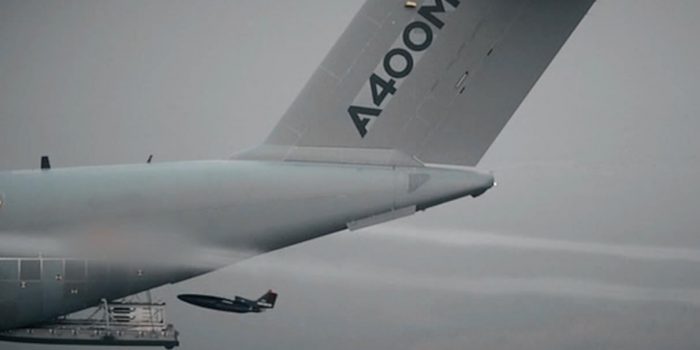 Next-generation fighter jets will go into combat with semi-autonomous wingman drones designed will function as force multipliers. Airbus has unveiled its Remote Carrier demonstrator out of a cargo plane, for a mid-air launch.

This will become part of Europe’s Future Combat Air System (FCAS) program. These stealth drones will be loaded with mission-specific payloads and armaments, for air-to-air, air-to-ground, recon, intelligence, and electronic warfare scenarios.

They are way smaller and cheaper than fighter jets. One of the major parts of the FCAS plan is to get these Remote Carrier drones into the theater of battle through large military transports like the A400M Atlas. One Atlas will be able to drop 50 small Remote Carriers close to their destination – or 12 larger “heavy” Remote Carriers.

The drone is ejected from the cargo bay of the A400M, under remote control by a pilot on board the plane. Once clear of the transport plane, its jet engines are powered up and started.

Then, the aerial team gives control of the powered-up UAV to a ground-based remote pilot, who takes it off on a separate mission before landing it at an airstrip.

The US Air Force is working on its own ways of delivering lethal force using large cargo planes. Its Rapid Dragon system, described as a “bomb bay in a box,” is a pallet full of precision munitions that get dropped out of the cargo bay of unmodified C-17 or C-130 Hercules transports on a parachute.

Floating downward, it launches its kits, which fire downward and away from the chute before establishing control and heading off on whatever autonomous or remote-piloted mission they’re slated for.

The USAF has already demonstrated the system in a live fire exercise. Last month, it used the Rapid Dragon system to launch a Joint Air-to-Surface Standoff Missile in Norway.