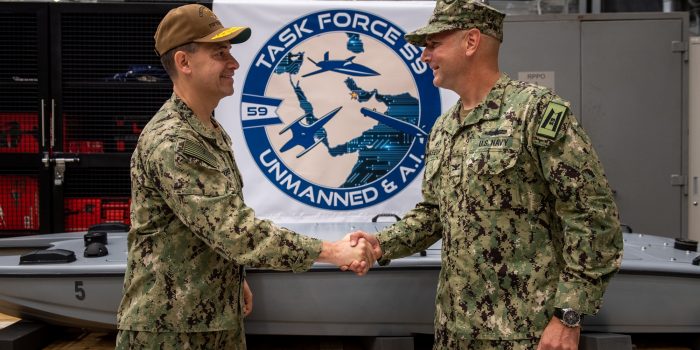 Earlier this month, the United States Navy launched an unmanned aerial vehicle (UAV) from one of its ships. The most recent event, Digital Horizon, demonstrates an integration of AI with the naval forces.

The event went on for three weeks which started on Nov. 23 and ending on Dec. 15. It comprised 10 current AI and UAV platforms in the region, that will operate with the U.S. 5th Fleet for the first time.

“I am excited about the direction we are headed,” Vice Adm. Brad Cooper, commander of U.S. Naval Forces Central Command, U.S. 5th Fleet and Combined Maritime Forces, said previously in a press release. “By harnessing these new unmanned technologies and combining them with artificial intelligence, we will enhance regional maritime security and strengthen deterrence. This benefits everybody.”

The U.S. Navy performed the naval exercise in the Middle East, integrating artificial intelligence with unmanned systems. On Dec. 7, the U.S. Navy launched an Aerovel Flexrotor UAV from the USCGC (United States Coast Guard Cutter) Emlen Tunnell (WPC 1145), a fast response cutter, or Coast Guard sailing vessel 65 feet or longer. There is another UAV called the Shield AI’s V-BAT that the organization will launch, along with the Easy Aerial’s tethered UAV.

According to the U.S. Navy, “Emlen Tunnell is one of the Coast Guard’s newest Sentinel-class fast response cutters.”

“We are so excited to be part of Digital Horizon and play a critical role by helping integrate new technologies into the fleet,” Lt. Patrick Kelly, Emlen Tunnell’s commanding officer, said in the statement.

The Flexrotor can support intelligence, surveillance, and reconnaissance missions (ISR) missions using an infrared camera to provide real-time video throughout the day. It combines both artificial intelligence and unmanned systems to show its future use within the organization.

Task Force 59 is an innovative event that could lead to breakthroughs for maritime forces. “Each day during Digital Horizon we have pushed to discover new capabilities, fast,” said Capt. Michael Brasseur, commodore of Task Force 59.

“I am so proud of the team for their steadfast commitment to not only imagine new possibilities but to deliver them.” The U.S. Fleet aims to incorporate AI in their unmanned vessel fleets, while also working with manned vessels.