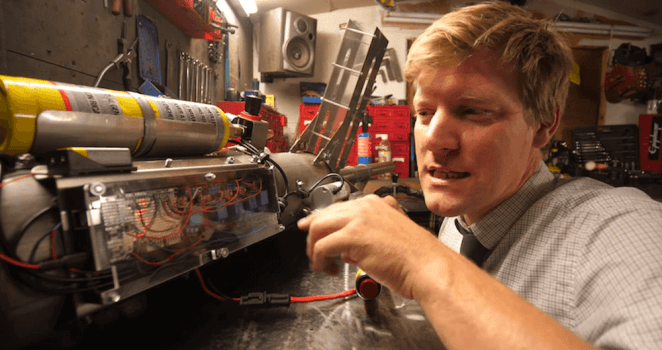 Our regular readers know that we are a fan of Colin Furze, the famous YouTube user known for his innovative inventions. Our favorite inventor is back, and this time he is busy creating a unique addition to this home-made screw tank. What is the addition, you ask? It is a semi-autonomous potato launcher! Ah yes, trespassers beware!

Why did he choose potatoes? Who knows. It could be because of their shape and weight. However, Colin Furze did say that there were two contenders for the weapon; a flame thrower and a potato launcher. He decided to favor the potato launcher because let’s face it; tanks do not look cool with flame throwers at all.

Furthermore, having a potato launcher gives the potential possibility of launching other items as well, given that they would fit in the potato launcher. The video that has been added at the end of this post will take you through the entire ride of creating the potato launcher. However, we should point out that you cannot do this at home and that this project requires expert skill levels to execute it safely and without any hiccup.

After creating the first iteration of the potato cannon, Colin decided to test it on a few barrels. He was not really satisfied with the outcome and decided that it needed more work before he would call the project over. He went back to his workshop and focused his mind on improving the weapon. In his own words, he wanted a truly semi-automatic potato cannon, and that’s what he was trying to achieve.

So, did he succeed, and how does the final iteration of the potato cannon look? Well, instead of taking our word for it; why don’t you check out the video below. But make sure to share this with your friends and family members, and do let us know what you think of it!