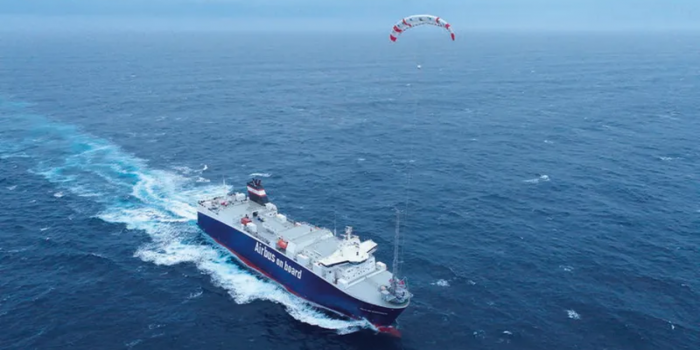 Airseas released the first video of its Seawing towing system in action on Tuesday. The French startup, founded by ex-Airbus engineers, announced the completion of the “crucial initial stages” of its transatlantic sea trials.

A red-and-white kite flew 660 feet above a large blue ship cruising across an empty, sweeping stretch of the Atlantic Ocean. The 2,700-square-foot parafoil assisted in towing the cargo ship, reducing the workload on the massive diesel engines and lowering the ship’s use of dirty fuel.

Airseas anticipates that its Seawing system will be able to reduce ship fuel consumption and thus greenhouse gas emissions by an average of 20%.

“We are proud to have a solution that can help ships reduce their emissions right now and accelerate the decarbonization of the maritime sector over the coming years,” Vincent.

According to the International Maritime Organization of the United Nations, international shipping accounts for nearly 3% of global annual CO2 emissions. This percentage is expected to rise in the coming years as more ships sail to transport larger quantities of cargo.

The Organization will hold environmental meetings next week and again in the summer of 2023 to negotiate a 2050 net-zero emissions target.

Wind-blown devices are gaining traction in the shipping industry as a way to immediately reduce emissions from these highly polluting, diesel-guzzling cargo ships.

Almost two dozen large commercial vessels now use “wind-assisted propulsion,” which includes kites, wings, and rapidly spinning rotor sails. According to the International Windship Association, that number is expected to reach 50 vessels by the end of 2023. While this is a small proportion of the more than 100,000 merchant ships in service today, it represents significant growth for the emerging industry.