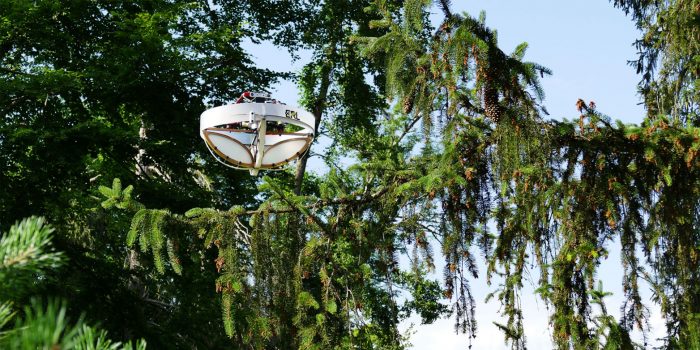 Understanding the biodiversity of forests is crucial to their conservation or restoration. Collecting “external DNA” left behind by living organisms is a good way to find out what lives there without having to spot them or even be there at the same time. Ecologists are increasingly using these traces of genetic material left behind in the environment, called environmental DNA (eDNA), to catalogue and monitor biodiversity.

These can be found in soil, water or on surfaces like rocks and tree branches. Basically, anywhere an animal might hang out, it leaves a trace of itself, and we can detect that. But other habitats – such as the forest canopy where birds, small mammals and insects live their whole lives are inaccessible without special equipment – are difficult for researchers to access. As a result, many species remain untracked in poorly explored areas.

Researchers at ETH Zurich and the Swiss Federal research institute for Forest, Snow and Landscape Research WSL who have partnered with the company SPYGEN have developed a flying device that can land on tree branches to take samples.

The drone is equipped with adhesive strips. When the aircraft lands on a branch, material from the branch sticks to these strips. Researchers can then extract DNA in the lab, analyses it and assign it to genetic matches of the various organisms using database comparisons.

But not all branches are the same: they vary in terms of their thickness and elasticity. Branches also bend and rebound when a drone lands on them. Programming the aircraft in such a way that it can still approach a branch autonomously and remain stable on it long enough to take samples was a major challenge for the roboticists.

Researchers have tested their new device on seven tree species. In the samples, they found DNA from 21 distinct groups of organisms, or taxa, including birds, mammals, and insects. „This is encouraging, because it shows that the collection technique works, “says Mintchev, who co-?authored the study that has just appeared in the journal Science Robotics.

“Our results pave the way for a generation of robotic biodiversity explorers able to survey eDNA at different spatial and temporal scales,” write the researchers. “By allowing these robots to dwell in the environment, this biomonitoring paradigm would provide information on global biodiversity and potentially automate our ability to measure, understand, and predict how the biosphere responds to human activity and environmental changes.”