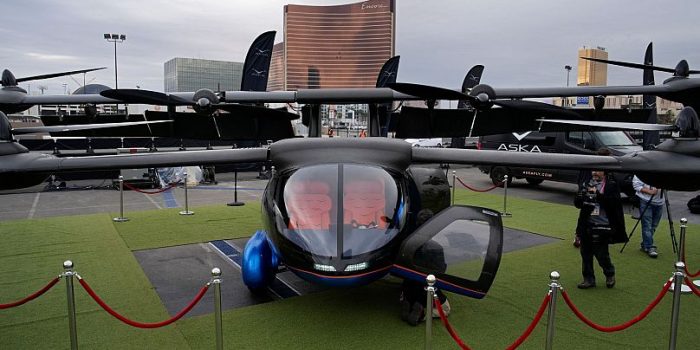 At the 2023 Consumer Electronics Show in Las Vegas, the ASKA A5 electric drive and fly Vertical Takeoff and Landing (eVTOL) vehicle made its debut. The SUV-sized vehicle is the world’s first four-seater electric vehicle, capable of traveling up to 250 miles by air and up to 250 miles by road on a single charge.

The flying car is positioned as a next-generation vehicle capable of addressing issues such as traffic congestion and mobility. ASKA also intends to enter a few crucial industries. “ASKA is a vehicle that addresses not only consumers,” says Guy Kaplinsky, co-founder, and CEO of ASKA. “There is also considerable business potential in emergency response use, military use, and on-demand ride-sharing mobility services.”

The ASKA A5 is propelled by a patented dual-energy power system comprised of lithium-ion battery packs and a gasoline engine. To improve power supply reliability, the gasoline engine acts as an onboard range extender.

ASKA’s six rotor wings unfold when in flight mode. This enables the vehicle to take off vertically (like a helicopter would) or conventionally on a runway (like a plane). ASKA requires a little place, such as a helipad or vertiport, for vertical takeoffs and landings. The vehicle employs its in-wheel motor technology to take off in less than 5 seconds with a runway of 250 feet for standard takeoffs and landings.

According to Scott Tharler’s review, “I sat inside the cockpit, and I saw the vehicle transform.” And with verbal guidance from David, a pilot consulting with ASKA, I flew a virtual version of this futuristic “car” right under the Golden Gate Bridge before proudly landing back at San Francisco airport, courtesy of a flight simulator the company had on hand.

ASKA’s on-demand ride-sharing service will make use of the company’s eVTOL vehicles. The initiative, which is slated to launch in major cities by 2026, will include certified pilots picking up ride-share passengers at their homes and flying them to their destinations.