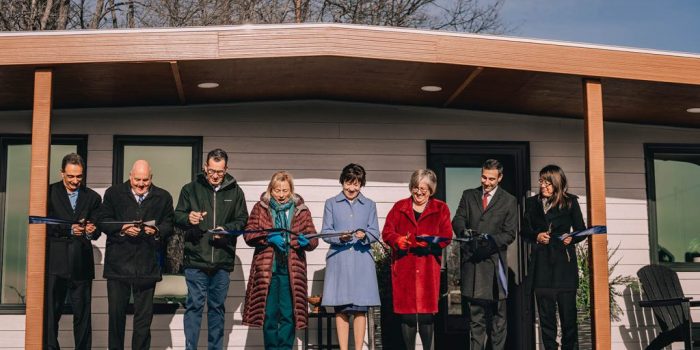 The University of Maine Advanced Structures and Composites Center (ASCC) has unveiled BioHome3D, the first 3D-printed house made entirely with bio-based materials. The 600-square-foot prototype has been a project at the center for years. The home is constructed from recycled materials such as tiles and repurposed wood waste. The university says 20,000 low-income homes are needed in Maine. ASCC Executive Director, Habib Dagher, says this is a step forward in addressing the affordable housing crisis facing Maine and other areas of the country.

Dagher said: “It’s a lot of people working together towards a goal and a dream to provide housing to people that need it.” There’s an incredible housing crisis, not only in Maine but throughout the US; the cost is too high, and we don’t have people to build them. So the other way to get there is to automate the process; that’s what we’re trying to do, and instead of using very expensive materials, we’re using wood residuals from the forest.”

While most 3D-printed construction uses concrete, researchers at the UMaine center used scrap lumber, sawdust, and construction debris to make wood “flour” that can be used as a basic building material. The fine powder is formed into pellets using biopolymers, which are naturally formed by green plants, animals, bacteria, and fungi. The pellets are then melted and extruded by the 3D printer into the desired shape. The center built the BioHome3D prototype in collaboration with MaineHousing, the U.S. Department of Energy, and researchers at Oak Ridge National Labs.

Eventually, researchers hope to “print” the BioHome3D in as little as three days, including walls, floors, and a roof. The technology someday could be used to build apartment complexes, researchers have said.

Regarding the housing crisis, the printed wood fiber home is being touted as a solution for those in need of low-income housing, with those needing such accommodation being a growing population in the city. The US needs 6 million affordable homes right now, and Maine in particular needs more than 20,000, and that number is growing each year, according to the Maine Affordable Housing Coalition. According to the coalition, almost 60% of low-income renters in the area spend more than half of their income on housing.