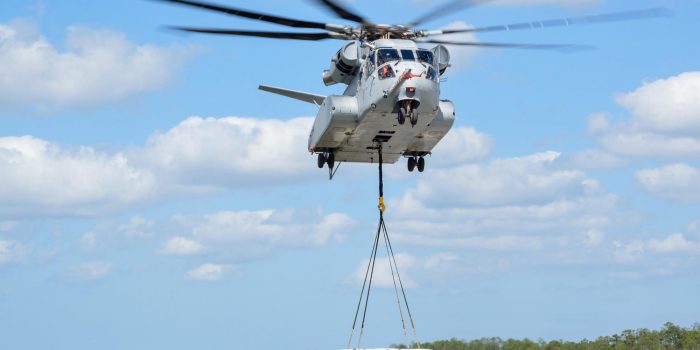 U.S. Navy is starting full-rate production of the CH-53K heavy lift helicopter. Sikorsky will ramp up to building more than 20 King Stallions a year to supply the Marine Corps with a new heavy-lift rotorcraft capability.

“Ramping up production of the most technologically advanced helicopter in the world allows the U.S. Marine Corps to build out its CH-53K King Stallion fleet and support mission success,” said Bill Falk, director of the Sikorsky CH-53K program. “This production authorization stabilizes Sikorsky’s domestic supply chain and is a testament to our enduring partnership with the Marine Corps.”

The aircraft is slated to fully declare full operational capability in the fiscal year 2029, NAVAIR said. Israel has also chosen the CH-53K to replace its aging legacy CH-53 “Yas’ur” fleet.

“We have successfully demonstrated the performance and reliability of this aircraft,” said Col. Kate Fleeger, PMA-261 program manager. “With FRP, we will continue to build on the strong manufacturing, sustainment, and support established for the CH-53K.”

The company overcame issues that included a cracked main rotor gearbox, the Marine Corps took delivery of the first test aircraft in 2018. Still, they came across engine exhaust ingestion problems that have since been corrected. Another issue was the 53K’s ability to fly in dusty environments similar to terrain commonly found during the wars in Iraq and Afghanistan.

Marines with the service’s Operational Test and Evaluation Squadron 1, or VMX-1, have been training with many CH-53Ks at Marine Corps Air Station New River in North Carolina and elsewhere since the first delivery.

Two of the initial test aircraft flew across the country from North Carolina to California in August to test aerial refueling and self-deploying capabilities, while also practicing desert and mountain operations at Marine Corps Air-Ground Combat Center in Twentynine Palms.

The CH-53K is the largest operational helicopter in the U.S. military’s inventory. It has three 7,500-shaft-horsepower General Electric GE38-1B engines and has a gross weight of 88,000 lb.

King Stallion still has a lot to achieve. The CH-53E has been a constant for the USMC for decades, but these aircraft are old and have been working very hard, especially over two decades of perpetual warfare in Iraq and Afghanistan. CH-53K is expected to bring a new layer for Marine Corps.