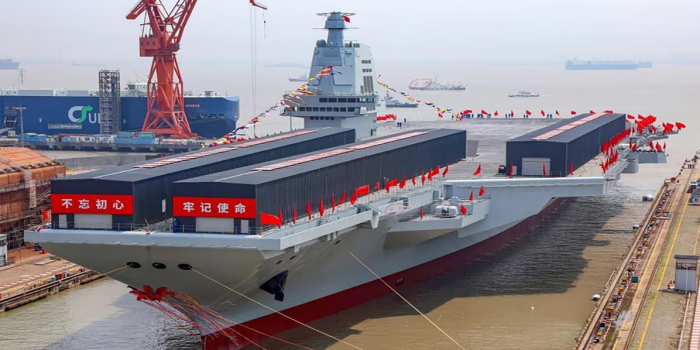 “In the new year, we must take hold of all the work centered on the sea trials and contribute to realizing the army’s [Two Centenaries] goals,” said the ship’s Senior Capt. Qian Shumin in a video address on Tuesday.

The Fujian is China’s largest and most complicated warship to date. It represents a watershed moment in Xi’s plan to modernize the military and close the military gap with the United States. On June 17, the ship was launched with great enthusiasm. It is currently being built in a shipyard in Shanghai, with mooring trials beginning in September to cut the time until delivery.

The fit-out process occurs after the vessel’s launch and before sea trials when construction is completed, and the ship is ready for delivery. A vessel’s systems are tested during mooring trials to see how well they work alone and jointly, including mechanical equipment and powerful propulsion.

Shumin also stated that in the coming year, China must take leadership of all sea trials-related operations and assist the military in meeting its Two Centenaries goals.

China aspires to realize the second of President Xi Jinping’s “Two Centenaries” goals: to place the country in the forefront of global powers by 2049 when it celebrates its centenary.

“President Xi [Jinping] specifically mentioned the launch of the Fujian in his New Year’s message. As a member of the Fujian ship, we are deeply proud and honored,” Qian said.

On December 31, President Xi indicated that Fujian is anticipated to have a sizable presence in the Taiwan Strait. The Chinese President said, “I sincerely hope that people on both sides of the Taiwan Strait will collaborate and share the same objective to contribute to the long-term prosperity of the Chinese nation.”