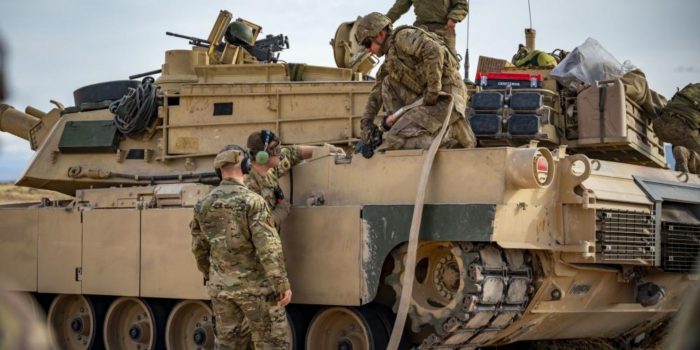 The U.S. Air Force has successfully simulated the use of its C-130J Super Hercules aircraft to refuel the Army’s M1 Abrams tank, a military press release said. The engines of the C-130J were still running while the refueling simulation was attempted.

The exercise was carried out at Fort Bliss in Texas on December 9th and included members of the 1st Armored Division for the U.S. Army and the 40th Airlift Squadron of the U.S. Air Force.

They used an Emergency Response Refueling Equipment Kit (ERREK) which is a device described by the U.S. Air Force as specialized fueling equipment that can be used for a ‘hot-pit’ refueling.

In aviation parlance, hot pitting is refueling an aircraft when its engines are still running. During this process, even weapons can be replenished, or the aircraft crew can be switched. This can be critical in times of crisis or war, where valuable time might be lost in switching off and switching on the aircraft’s engines.

According to The Drive, the M1 travels not more than 0.6 miles on a gallon of gas. It has the capacity to hold 500 gallons of fuel, but it can not go more than 300 miles on a full tank.

The M1 can use different types of fuel to run itself and the Army is now also considering powering it using a hybrid power plant.

C-130Js have carried fuel for tanks before, but the direct refueling during a hot pit could help the Army become more adventurous in its exploits, backed by the agility of the Air Force.