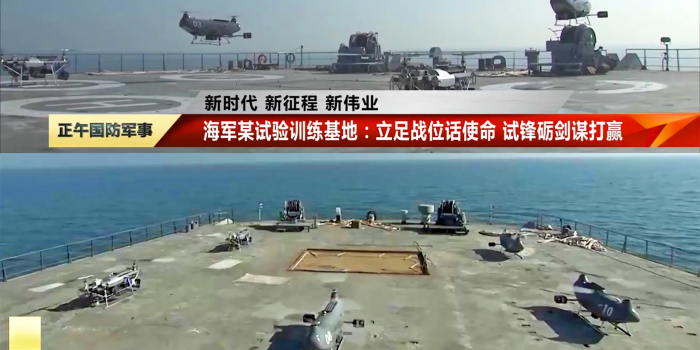 “Navy Experimental Training Base” has been showcased by the Chinese state television station CCTV-7. The unusual catamaran drone mini-carrier has been called into service on an experimental basis by China’s People’s Liberation Army Navy, or PLAN.

Similarities between the mini carrier and the vessel seen at the state-run China Aerospace Science and Industry Corporation, or CASIC, had on display at the 2021 Zhuhai Airshow were stark. Unfortunately, a full view of the ship was never given, but one could make out that the unique features of both are more or less the same.

Another thing that can be observed during the clips shown on CCTV-7 is that helipads are marked with the letter H in their center, and then there are unmarked circles. In addition, unmanned helicopters with a rather peculiar design can also be seen; distinctive tandem-rotor design is what it is called and are relatively uncommon in rotorcrafts. These drone helicopters may be a variant or derivative of the ZC Aviation ZC300, which the PLA has at least evaluated in the past as a way to transport small cargoes.

These drones were developed in cooperation with the Hainan Tropical Ocean University. There is also speculation that these drones are equipped with laser-imaging sensors and small radars for “oceanic observation research.”

All said and done; there is no denying the fact that the carrier will provide a valuable platform for helping to simulate drone swarms, high-volume anti-ship cruise missile strikes, and large-scale electronic warfare attacks, among other threats, across a broad area, and doing so at a relatively less strain on the budget. This would not only enhance the PLAN’s capability but will also improve and assist research and development projects in the future.

PLA and PLAN are on the right track as far as simulating enemy activity/ capability are concerned. These simulations will assist the Chinese forces in getting better training for different scenarios, such as drone swarms and electronic warfare systems, which are real threats now. Therefore, the induction of such carriers will enhance Chinese capabilities.

This is not shocking or, to put it in better words, surprising because everyone knows that there is raging competition between China and the USA in almost every sphere, and defense technology is no different. Be it the development of uncrewed systems, autonomous technology, and electronic warfare capabilities; these countries are going head-on. However, one must acknowledge the awareness PLA has shown in assessing its enemies and taking concrete steps in this regard. China, indeed has taken giant strides in the last couple of years.

This, when taken into context, shows that China is preparing for future war at a time when U.S. military officials have become increasingly outspoken about the threats of drones, including lower-end commercial types, both at home and abroad. Moreover, the threat is not limited to air and land forces. It has also spilled into the naval sphere, where the U.S. Navy has experienced a growing number of drone-related incidents, including harassment of its warships by multiple uncrewed systems right off the coast of the United States.

It would indeed be an exciting chapter to cover and see what differences this catamaran drone carrier and its work supporting the PLAN will make in research, development, and actual combat.