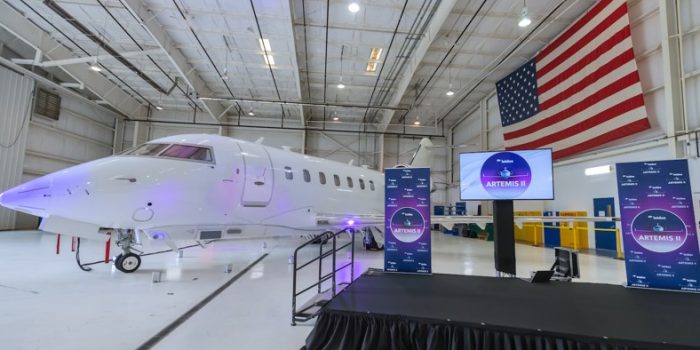 On December 8, Leidos unveiled the latest ARTEMIS II in a turnover and ribbon-cutting ceremony to unveil the US Army’s new military aircraft designed to intercept enemy communications at 40,000 feet in the air. The aircraft is a Bombardier Challenger 650 outfitted with Leidos modifications that provide surveillance and decipher chatter.

Its technology, which can monitor, detect, intercept, and decipher enemy chatter from 40,000 feet in the air, is one of its most impressive features. The ARTEMIS II can “operate at higher airspeeds, allowing deeper signals to gather across a broader area while maintaining an acceptable standoff position,” according to Leidos.

Moreover, the ARTEMIS features 4,000 nautical miles of range and is capable of providing almost ten hours of operation to collect data from above. Leidos’ ARTEMIS is already watching Ukraine from above, under the US Army.

The United States military is expanding its aerial fleet for its various branches, with a focus on multiple contractor-owned intelligence aircraft and planes designed for defense or war. Raytheon Technologies was awarded a contract with a budget of more than $985 million to develop the Hypersonic Attack Cruise Missile (HACM) with Northrop Grumman.

The US Air Force and Northrop also unveiled the B-21 Raider, the latest aircraft in their fleet, earlier this month. This aircraft, which is capable of stealth technology and is equipped with nuclear bombing capabilities, is currently regarded as the world’s most advanced strike aircraft.

That being said, Leidos’ latest ARTEMIS II delivers less firepower than other developments, but it has just as much importance in the fleet to do the Army’s bidding. Now, the new aircraft has been turned over to the country’s defense troops, focusing on its use for surveillance and monitoring for future needs.