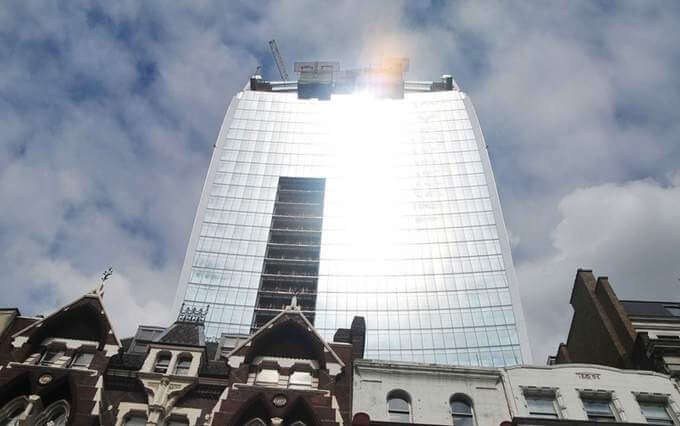 Wouldn’t you have hated it if you parked your car next to a gleaming skyscraper only to find hours later that the same skyscraper had melted your car by converging the sunlight? That is what happened to one unfortunate Jaguar Owner, Mr Martin Linsday when he parked his shiny new black Jaguar next to the newly constructed 37 storey skyscraper. Dubbed as the “Walkie Talkie” due to its unique shape, the skyscraper has a bend in its Facade which makes the whole building act as a converging mirror. The street opposite to the skyscraper now bears the brunt of upto 70 degree celsius of concentrated sunlight. So when Mr Martin parked his car that morning, he had no idea that such a thing could happen and ruin his car. The story of him finding about the “accident” is also pretty interesting. A photographer who was walking around the area noticed the car in bad shape. He casually went upto a stranger who was standing on the footpath and said ” Have you seen that car? The owner wont be happy”. The stranger remarked, ” Well, I am the owner and thats pretty awful”. The windscreen had a note beneath the wiper which was from the construction company that is constructing the skyscraper. It read ” Your Car’s Buckled, Could you please give us a call?”. This incident has sparked a new debate on the viability of the skyscraper design as it has started to effect the life of commuters on the street. With temperatures soaring upto 80 degree celsius, this could also cause serious burns to some unsuspecting passer by. Therefore, the construction company is now planning to modify the design of the building.
Nevertheless, the Jaguar of this unlucky owner is ruined and it must have felt awful. Check out some of the pictures of the car and the youtube video below.