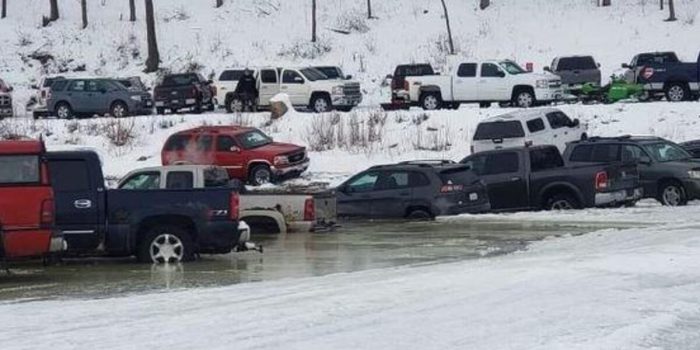 Ice is never 100% safe and every year officials warn everyone. This time around, six vehicles fell through the ice into Lake Pepin, Minnesota. Anglers keen to pull a fish from the icy waters flooded the lake this weekend, and when parking spaces ran out on land, people started parking on the frozen water. Eventually, the ice gave in and cracked. No one was injured, the Goodhue County Sheriff’s Office said.

“I was out maybe a quarter-mile out, and I had 12 inches of ice out there,” said ice fisher Brock Smith on Sunday. Smith said the parking lot was full Saturday, so drivers started parking on the lake. He watched from afar as six vehicles fell through the ice and had to be reeled in.

By the looks of it, it doesn’t appear any of the sunken vehicles were completely submerged; most appeared to be partially underwater or sticking out of the lake on solid ice.

While the ice may look thick enough to park on, the Minnesota Department of Natural Resources said vehicles should park at least fifty feet apart and move every two hours to avoid sinking.

Lake Pepin is a naturally occurring lake on the Mississippi River. After seeing people fall through over the years, Smith hopes the county will add more signage indicating where the natural spring are, and where the ice is likely to be thin.

“The season really is always like this. That’s why you see a lot of foot traffic and four wheelers and we all wish and wait for us to be able to drive out there,” he said.

The DNR says you need at least 5 inches for a snowmobile or ATV, 8-12 inches for cars or a small truck, and 12-15 inches for a medium-sized truck. The thickness should be doubled if the ice is covered in snow.