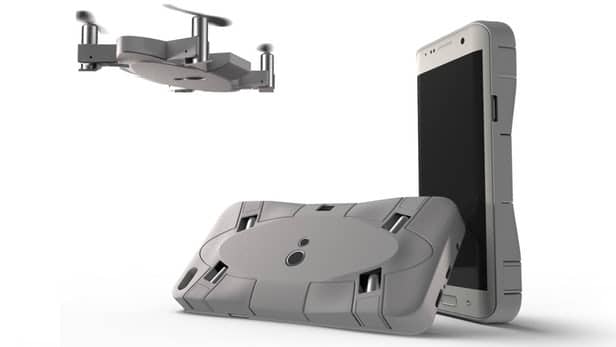 Just a couple of months ago, we saw the “AirSelfie” drone taking the popular trend of selfies to new horizons, and now, “Selfly,” another startup, seems to be doing something similar.

‘Selfly’ is a camera-equipped flat-bodied drone that can be attached to an accompanying smartphone case and bring a new perspective to your pictures. To use Selfly, you simply need to take it out of its case, fold out the motors/propellers and just throw it up to snap a perfect selfie.

The drone will autonomously hover in place while using its 8-megapixel camera to send real-time videos to the companion iOS/Android app. The app can be used to maneuver the aircraft via Wi-Fi connection and compose the shot by using on-screen joysticks or by tilting the phone.

The 9 mm thick drone can transfer still pictures or recordings of 1080p/30fps. But its 650mAh battery only runs for five minutes, which is probably the only drawback of the unique concept.

The company claims that its adaptor can fit on all 4-to 6-inch phones, with dedicated cases for the

Would you like to get this incredible product for yourself? Or would you prefer to wait till a gadget comes with a longer battery life? Comment below!