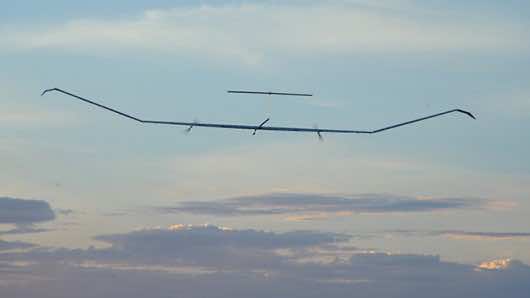 Qinetiq Zephyr – a solar powered UAV, previously known as Zephyr is currently part of the Airbus High Altitude Pseudo-Satellite (HAPS) program. Airbus Zephyr is also famous for its streak of breaking records and this post is about yet another record that has been set by this UAV in the skies over Dubai.

Back in 2010, it set 3 world records that included record for the longest endurance flight for an UAV that lasted for 336 hours, 22 minutes and 8 seconds and now this amazing UAV has managed to set a record for the highest altitude flight that managed an altitude of 18,805 meters in UAE while lasting for 23 hours and 47 minutes – the longest flight in UAE. The highlight of this flight is not the records that it has set but the fact this flight was the first HAPS flight that had been authorized by a civil authority. For this particular flight, authority in charge was Dubai Civil Aviation Authority (DCAA) and the flight took place on 11th September at 06:21 am local time. The Zephyr began its journey from Margham area of Dubai and completed a day/night cycle of operation in the vicinity of an airport that is one of the world’s busiest three airports without hindering any civil air traffic. The Zephyr landed back at Dubai at 06:18 am on 12th September. The team working for this project to happen was comprised of engineers from the Emirates Institution for Advanced Science and Technology (EIAST) that has collaborated with the Airbus Defence and Space to develop the HAPS system. The collaboration started in March 2014 and the end result was an UAV that weighed in at 75 pounds and had a wingspan of 59 ft.

Technical Director of the Airbus HAPS program, Chris Kelleher said, “The flight in Dubai demonstrated the ability of Zephyr to operate in regions of the world’s most crowded airspaces. I am immensely grateful for the support and diligence of the Dubai CAA and other authorities in working closely with the combined EIAST Airbus Team to ensure a safe and successful stratospheric flight. With all systems working well in temperatures ranging between +40° C and -80° C (104° F and -112° F) and up to a maximum altitude of 61,696 ft, this flight further reinforces confidence in Zephyr for users and regulators.” Zephyr is capable of flying in the stratosphere, thus providing benefits of a satellite when looked at from ‘altitude and applications’ aspect. The program is ready to jump to phase 2 which will be completed in 2016 and the first generation of HAPS aircraft will be produced by the end of 2016.