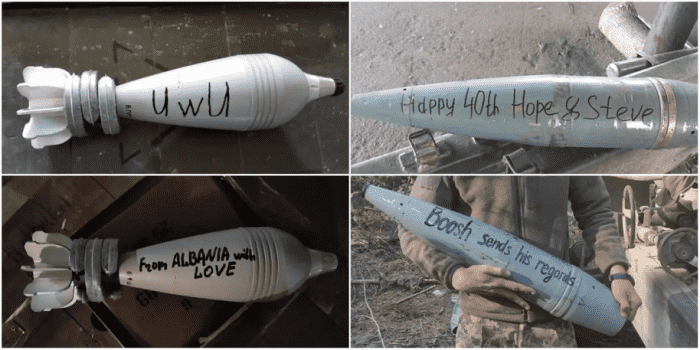 In exchange for $40 per message, a Ukrainian Telegram user is offering to put a message of your choice on artillery rounds that will then be launched towards Russians. According to the account, the funds will be used to arm the Ukrainian military.

“You have a chance to kill orcs with your text on 82mm artillery grenade that will be fired at Russian soldiers,” reads one of Sokolenko’s promotional posts. (Orc is a common Ukrainian insult for Russian soldiers.)

“You will receive a photo of your signed grenade.”

Anton Sokolenko, a 22-year-old IT student from Cherkasy, Ukraine, owns the account. He told Insider that the $40-a-shell bargain had raised thousands of dollars for the local military.

Sokolenko claims this is an unofficial agreement that senior Ukrainian military commanders have not yet authorised. According to him, the images are unlikely to reveal the identities or whereabouts of the soldiers.

Sokolenko said he gets orders online, mainly through his Telegram channel, and collaborates with a local NGO to inscribe the shells. Then he returns the photos and transfers the $40 to the NGO.

The NGO “Center for Assistance to the Army, Veterans and Their Families” confirmed to Insider that Sokolenko is a registered volunteer who has sent over $18,000 in donations. In addition, it supplies nearby battalions with tactical equipment and supplies.

“All donations will be used on equipment for our soldiers,” according to the telegram advertisement. A personalised inscription on a shell costs $40. If you buy two, you get a discount. That’s $70.

“Soldiers at the front will write your text with indelible marker on the whole side of a 152 mm artillery shell,” the Telegram post said. “And then fire at Russians. You can ask to write any text: wish someone a happy birthday/ death in pain, propose marriage, name, Instagram/ telegram username.”

The Telegram message includes handles for PayPal, Venmo, and Revolut and a bank account number for wire transfers. Clients are asked to take a screenshot of the donation and send it to artillery text over Telegram or email. The account will respond in a few days to a few minutes with a picture of the 152 mm message written on a shell.

The post also included multiple photographs of shells that had previously been ordered. Several others showed off the messages they purchased and claimed the business was authentic in the replies to the initial post. One displayed the statement “all pigs must die.”

Sokolenko stated that the funds raised to this point had purchased two Starlink systems, a pickup truck, and a thermal sight. In addition, radios, medicine, food, and sleeping bags have also been provided.

“I’m not that brave to participate in the war, so I’m trying to do my best to help soldiers to stay alive and to kill enemies,” he said. “At the beginning of the war, I wasn’t doing anything, and it kept bugging me.”

When queried about the project’s ethics, which could be perceived as making a mockery of war casualties, Sokolenko said:

“It’s a bit provocative question, but as a Ukrainian — as with every Ukrainian — I can say that I’m happy to know that as many Russian soldiers were killed as possible.”