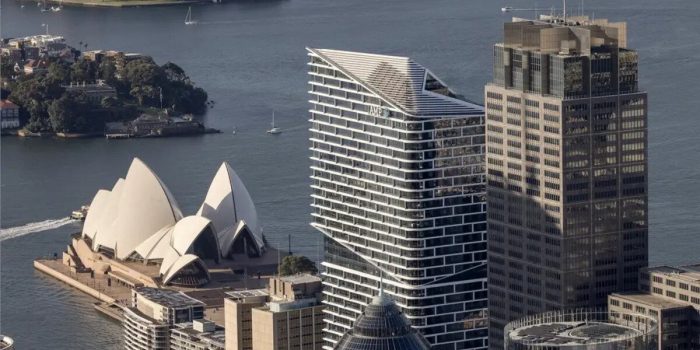 Named World Building of the Year at the World Architecture Festival, Quay Quarter Tower in Sydney, Australia, is the World’s first ‘upcycled’ skyscraper. The 676 foot, 49-storey skyscraper was partly built around the structure of an existing office building, and it retained more than two-thirds of the old structure, including beams and columns, as well as 95% of the original building’s core.

The tower, which opened earlier this year, was based on the AMP Centre that opened in 1976 and had reached the end of its viable life. The AMP was once Sydney’s tallest building. Its owner, AMP Capital, wanted a more eye-catching and energy-efficient building that could meet the needs of tenants in the 21st century but was also concerned about the environmental impact of demolishing the structure.

So, they decided to hold an architectural competition with a sustainable brief, challenging architects to build a new skyscraper without knocking down the existing tower.

The architects believe their approach saved 12,000 tons of CO2 when compared to demolishing the tower and starting from scratch — enough to power the building for over three years or as much carbon dioxide as produced by 35,000 flights between Sydney and Melbourne. As well as reducing the use of carbon-intensive materials like concrete, the scheme may have saved up to a year in construction time.

Quay Quarter Tower contains an array of offices and retail outlets. There are multiple rooftop terraces overlooking sights such as the Sydney Opera House, the harbor, and its famous bridge. The building’s owners hope the design will help “redefine the future of work” and “promote human interaction.”

“I think many developers didn’t look at [upscaling] as an option,” said Kim Herforth Nielsen, the founder of 3XN, the Danish architecture firm that oversaw the project. “But now it has been done here and can be a great example of how to do it in the future.” New design features reduce direct sunlight by 30%, which stops windows from needing internal blinds, consequently providing unprecedented views of Sydney’s harbor.

Hence it was a win for the climate and the project’s budget. The upscaling plan also saved up to a year in the project’s timeline.