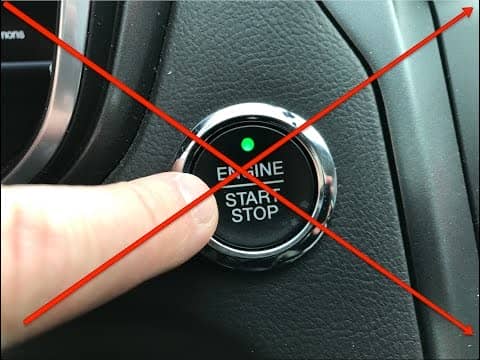 After the vast success of “What if you put your car in reverse when driving forward?”; here comes a far more dangerous proposition. What happens if you – accidentally or intentionally – press the on/off button in your car while you drive on a highway? Would it shut off the car there and then? That would be one hell of a traffic hazard!

Watch YouTube’s AutoVlog crazy attempt on his own car:

So if you didn’t have time to watch the video, here’s the summarized transcript. The car did shut off when it’s speed was below 5 mph, but a quick press of the On/Off button didn’t work when the speeds were higher.

Usually, this is the case with every car with the push button mechanism, as it assumes that you have made a mistake and continues to hum along. Some cars, like the Volt, do ask for confirmation, and pressing the start button again will turn off the ignition, no matter what the speed. Other cars such as the Prius and the YouTuber’s Ford will shut down if you press down the start button for more than three seconds. This feature might come in handy if you have a problem with your accelerator or the brakes and want to turn off the car in an emergency.

What Would Happen If You Put Your Automatic Transmission Car In Reverse While Driving?

Of course, if you try to shut off a manual car when riding at high speeds, it will pose no resistance but might seriously damage the Bendix drive which is an engagement mechanism in the starter motors of IC engines.