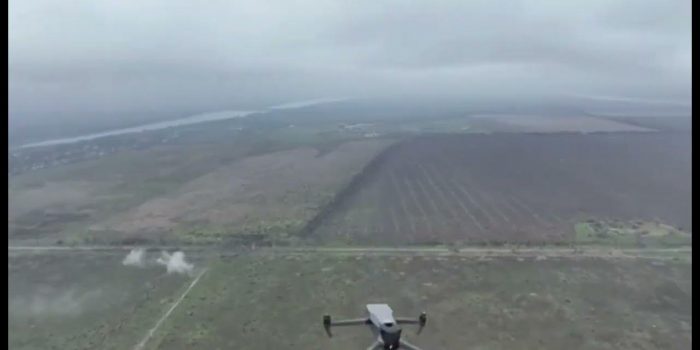 The footage is likely both the first example of air-to-air drone combat and the first instance of a small commercial drone engaging another one of its kind during the war in Ukraine. The video was originally published by a Twitter account belonging to Ukrainian journalist and influencer Serhiy Pritula, who earlier organized a successful crowdfunding campaign to acquire Turkish-made Bayraktar TB2 combat drones for the Ukrainian armed forces.

Ukrainian troops shifted the war’s momentum this fall with their successful counteroffensive in the country’s north and south. However, the liberation of Kharkiv, Kherson, and other cities may prove pyrrhic victories if Ukraine’s military and its Western supporters cannot counter Russia’s drones, which are devastating Ukraine’s utility infrastructure on the eve of winter. After recent battlefield gains improved its hand in potential future negotiations with Russia, Kyiv is now watching its position erode as residents are evacuated from Kherson mere weeks after shedding Russian occupation.

The text in the Twitter post said that the attacking drone was another Mavic. The model, which is widely available for purchase, is popular with both Ukrainian and Russian armed forces as well as various volunteer and paramilitary formations participating in the war. Such drones are usually used for observation, spotting, correcting artillery fire, and other similar tasks on the front. Similar types of unmanned aerial vehicles are sometimes equipped with explosives that can be dropped from above or detonated near the target, transforming these relatively inexpensive devices into makeshift bombers and projectiles.