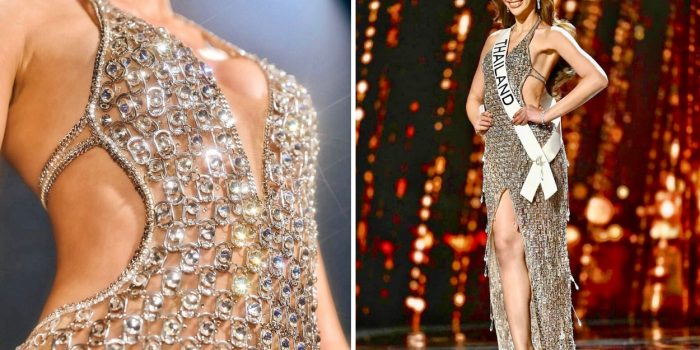 It’s become a bit of a tradition for beauty pageants to showcase unique clothing during the cultural dress and formal gown rounds, with some rather eye-catching designs appearing in recent years.

However, Miss Universe Thailand Anna Sueangam-iam donned an outfit made primarily of soda can tabs that were both striking and significant.

The dress was created by Thai fashion house Manirat and has been dubbed the “Hidden Precious Diamond Dress” due to the many Swarovski crystals nestled and recycled pull tabs from aluminum cans.

Looking past the odd style, there appears to be a very good explanation behind the dress’s concept — Anna’s humble past.

Born into a poor household, Anna had grown up the child of two garbage collectors, and instead of being able to afford new toys like other better-off children, she’d played with discarded ones discovered in trash heaps, which led to other kids poking fun at her and calling her “Miss Garbage.”

“Growing up with garbage collector parents, my life as a child was among piles of garbage and recyclables,” she said in an Instagram post.

“This unique gown was purposefully tailor-made with discarded and recycled materials, namely the “can tab” to present to the universe that what’s considered worthless by many actually possesses its own value and beauty.”

Anna came in second in the Miss Universe 2023 competition held in New Orleans, US; however, she did receive the first-ever Transformational Leadership Award, given as part of a partnership between the Miss Universe pageant and social media platform ImpactWayv.