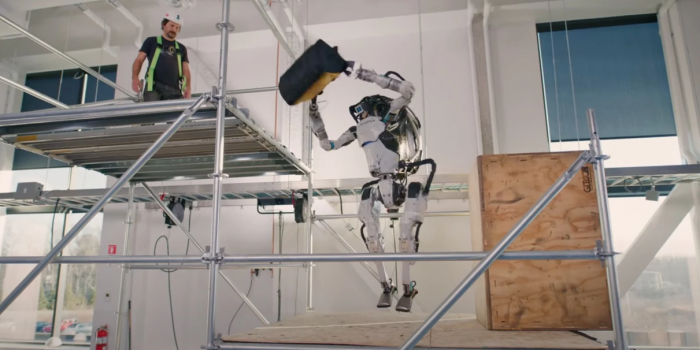 Boston Dynamics’ Atlas robot has already been seen dancing, doing backflips, and even parkour. However, it now has unique energy: the capacity to pick up and toss stuff.

The Atlas robot is seen in a new video carrying a tool bag up some scaffolding and then throwing it to a human construction worker standing on a simulated construction site. Atlas must navigate the site while remaining balanced using its sensors and a wide range of capabilities.

The Atlas robot initially takes up and places a large wooden plank as a bridge over the work site in the video. Then, after scooping up the tool bag with its two hands, the machine walks across the plank.

Atlas then twists and tosses the tool bag at the feet of the human construction worker. Following that, the machine pushes a wooden block out of the way before jumping off the work site in a 540-degree flip.

“Parkour and dancing were interesting examples of pretty extreme locomotion, and now we’re trying to build on that research to do meaningful manipulation.”

Moreover, the video emphasizes how Atlas could eventually replace humans. However, for the time being, the Atlas robot is still a research project, as opposed to Boston Dynamics’ Spot robot, which is for sale.

Atlas’s ultimate goal is to construct a “go anywhere, do anything” machine capable of completing human work.

“Manipulation is a broad category, and we still have a lot of work to do,” says Scott Kuindersma, Atlas team lead. “But this gives a sneak peek at where the field is going. This is the future of robotics.”