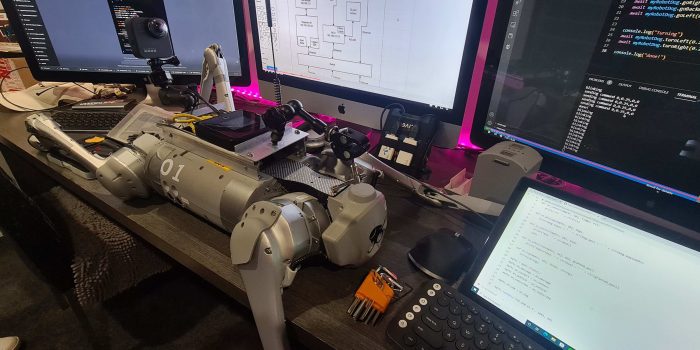 On a Saturday night, robot owner Mark Trueno went to Fortitude Valley with his robot dog, Stampy. He didn’t expect man’s artificial best pal to leave the robodog with a kick in the face.

That is exactly what happened. Not once, but twice.

The second stomp, 45 minutes later and from the same individual, confirmed that the first stomp was intentional.

“I’m not really sure why she did it, probably just thought it was funny at the time,” Trueno, an engineer who works for Arrowpoint Systems, a company that provides equipment to mining and military companies, told Vice.

Stampy is more than just a cute little robot. He’s actually a $15,000 military grade piece of equipment designed to be used in hazardous situations such as search and rescue operations.

Trueno says that bots like Stampy can be equipped with gas sensors to monitor air quality, build 3D maps, and generally travel where humans cannot.

Trueno, on the other hand, took such an expensive piece of equipment out to test its obstacle avoidance and 3D mapping capabilities in one of Brisbane’s most rowdy party zones.

Trueno offered a $500 reward for information on the attacker a day after Stampy the dog was violently kicked in the head. The first person to tip Trueno off was a man she considers a friend. The same person that accompanied her on the night of the stomp.

“The other person is the one who contacted me, and he was angry with her at the time. So he clearly wasn’t impressed with her behaviour,” Trueno explained, adding that the man was contacting him on behalf of the girl.

The woman twice assaulted the bot in a Facebook video that Stampy himself clumsily filmed. He claims he’s not making the girl pay because she’s young and might not have the means, despite the fact that Stampy’s damage, which included the loss of its 3D mapping data and the impairment of its depth perception sensors, was assessed to cost $2500.

While Stampy’s appearance may deceive, the robot dog weighs up to 20kg and is comprised of steel, aluminium, and carbon fibre.