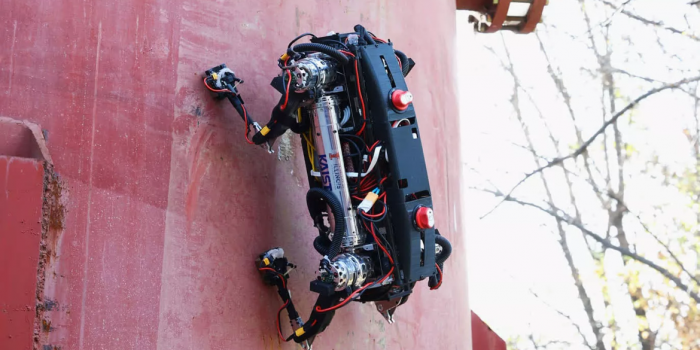 Researchers from the Korea Advanced Institute of Science and Technology (KAIST) and a colleague from the University of Illinois have created a quadruped bot with magnetic feet capable of climbing and traversing metallic walls and ceilings.

The researchers set out to create Marvel to help with maintenance work on massive metal structures such as bridges, oil tanks, and some buildings. The four-legged robot can move around on a flat area, then approach a wall and go straight up its side like a spider—and even cross the ceiling if needed.

Magnetic elastomers and electromagnets enabled the robot feet to magnetize and demagnetize on demand. By switching on and off the magnets, the robot can have a single foot cling to a vertical place on a wall and hold there until other feet adhere and then let go with one foot at a time to take steps.

The researchers also had to train the robot to start climbing and then move around or over obstacles. They recreated how a cat checks a surface before going forward, taking tiny first steps with its front paws before adding rear paw movement.

Marvel could step across 10-centimeter wide gaps, pass five-centimeter tall barriers, and transition from horizontal grounds to vertical walls and vertical walls to inverted ceilings in the lab. It can also transport payloads weighing up to three kilograms (6.6 pounds).

During the testing, Marvel could climb a curving storage tank covered in rust and dust at a speed of 0.35 meters per second. The bot’s quick walk allows it to reach speeds of up to 0.7 meters per second. It could even quickly move around obstacles on the tank’s side.

The team’s paper has been published in the journal Science Robotics.