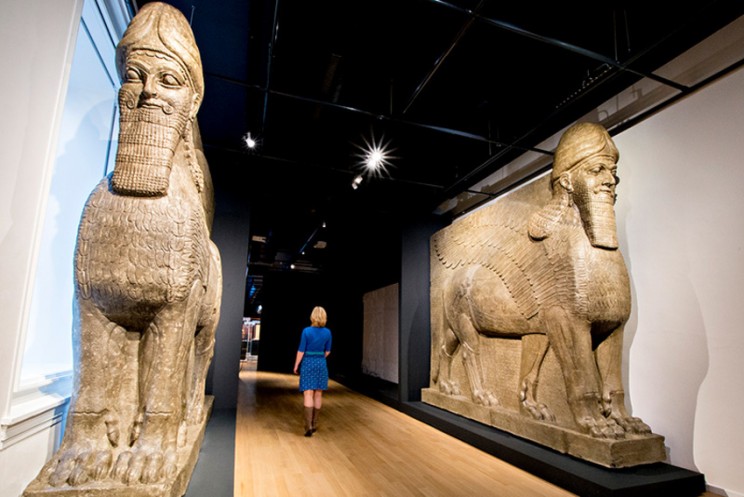 When the Iraqi city, Mosul, was occupied by ISIS, many archaic statues and artifacts were destroyed by the militants. Building the city again from the rubble will definitely be hard work but some of the destroyed statues can be rebuilt using the 3D-scanners. Two very detailed facsimiles of the massive stone statues known as Lamassu will be traveling to Mosul from the Netherlands and will be taking a permanent place there. While the Mosul was occupied, the Islamic State smashed many Assyrian artefacts. Now that the Islamic State has moved out of the city, the organizers of the Nineveh exhibition in the Netherlands has decided to send the replicas of the Lamassu to Mosul. Lamassu is considered to be the protective spirits and the original statues are almost 3000 years old in the Assyrian empire. The new statues are copies of two Lamassu which were originally excavated by a British archaeological expedition in the mid 19th century. While the Mesopotamia was being examined, the group discovered a field of artefacts which were buried for 2700 years. The Lamassu found was standing near the ancient city of Nineveh near Mosul. Two of the statues were brought back to London by the excavators. In 2004, Adam Lowe, art historian and head of Factum Arte, set out these statues at a 300-micrometer resolution so that copies of them can be produced for a travelling exhibition. Lowe and his team scanned the Lamassu and relief panels and shards at the British Museum. To scan the Lamassu, they used a white-light scanner which was built by the company NUB3D. The work of Factum Arte with these Lamassu is among the highest-resolution 3D scan ever of objects of that size. However, the travelling exhibition could not take place due to financial issues and the war in Iraq. The data from the scans was still preserved. Four years ago, Lucas Petit, the curator at the National Museum of Antiquities in the Netherlands, planned an exhibition about Nineveh. He also wanted to include the facsimiles in the exhibition. After Petit contacted Lowe, the work on the facsimiles started in 2016. Factum Arte used the data from the old scans to control a milling machine which was carving a dense polyurethane solid to the shape of each of the Lamassu. Then they used these models to make silicon molds in sections for the sculptures. The director of the Gilgamesh Center for Antiquities and Heritage Protection, Faisal Jeber, is very eager for the facsimiles to arrive. He said, “Lamassu has become an icon of the Mosul resurrection post-ISIS.” The east bank of the Mosul is slowly returning to normal now while the west bank which is still 60 to 80% destroyed. The city is still trying to re-establish the basic services like water and electricity. It was also announced that the British Museum will be holding on to the originals. However, the facsimiles pose questions about the authenticity and their actual belonging.