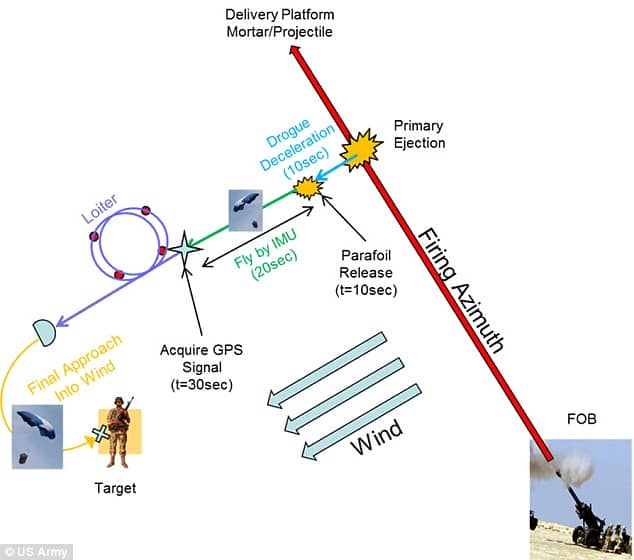 The US Army is redefining the word “friendly fire” as it has come up with a rather eccentric plan of bombing their own soldiers with mortars in a bid to resupply them on the battlefield.

The plan is part of the ‘Ammunition Resupply Projectile,’ where the Army is looking to develop a smart mortar that could be shot into a projectile towards the troops in the heat of the battle and provide them with ammunition, first aid, and food.

Ryan Decker, one of seven named on the patent application commented on the idea,

‘This concept allows a guided package to be delivered with incredible accuracy within minutes.’

The patent explains the idea as a tube-launched projectile that will hold a navigable payload in flight to accurately deliver the supplies to a distant target. The mortar will also entail a tail section that will be secured with the payload deployment section and will include a steerable decelerator system.

The system will have state of the art guidance and navigation system and will be designed to be a spectacle of electronics, power supply, and a parafoil control mechanisms, making it the most tech savvy mortar shot ever. The payload gets separated when airborne protecting the cargo while the navigation system along with the parafoil makes sure that the mortar doesn’t go astray.

Decker, who is the lead mechanical engineer at the Engineering Analysis and Evaluation Division and part of the U.S. Army Armament Research, Development and Engineering Center, spoke on the idea and its original inspiration,

“The first being the idea of a Soldier pinned down during battle, who depletes his supply of ammunition and currently has no reasonable method of resupply until rescue arrives.”

“The second source of inspiration was the development of the ‘Snowflake’ miniature guided parafoil system by Professor Oleg Yakimenko of the Naval Postgraduate School. His system was so small that it could be packed into the volume of a cargo projectile. His well-proven guidance algorithm was also the most accurate in the world, enabling precision resupply to a stranded Soldier.”

‘This invention is even more beneficial when it is realized that the payload can be easily swapped from ammunition to any device of similar size such as additional resupply items, surveillance electronics, or even a submunition which can all be delivered accurately and on target,’ said Decker.

While the technology is “unique,” the precision would need to be pinpoint to make sure the soldiers don’t have to leave the cover to fetch the ammunition, and the supplies don’t fall into the enemy territory. And using a drone to deliver the supplies is probably a better alternative than using expensive mortars that are basically useless after they are fired the first time.

Need some serious brainstorming before the plan can make some sense, but it’s an Army project so it probably doesn’t have to make sense anyway!