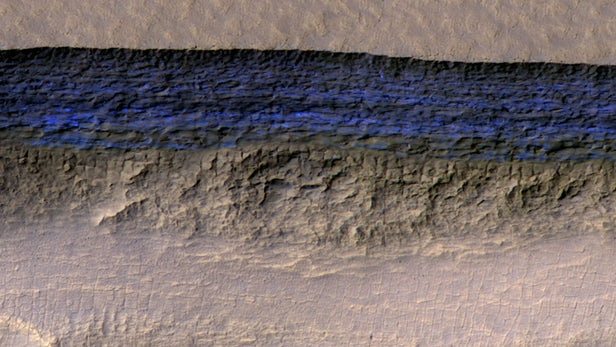 The previous scans came from the Shallow Radar technology and were limited. The new study focuses on eight spots around the middle latitudes of Mars where these sheets were exposed to the surface. Using the MRO’s High-Resolution Imaging Science Experiment (HiRISE) camera, a cross-sectional look at the ice was possible which made it easier to learn about the composition.

“The discovery reported today gives us surprising windows where we can see right into these thick underground sheets of ice,” says Shane Byrne, co-author of the study. “It’s like having one of those ant farms where you can see through the glass on the side to learn about what’s usually hidden beneath the ground.”

Some of the exposed sections are as thick as 90 meters and the researchers have theorized that the ice is really pure and there is a very little contamination by dust and rock in the water. This could be beneficial for future explorers. This, coupled with the fact that it is closer to the surface than previously believed means “Astronauts could essentially just go there with a bucket and a shovel and get all the water they need,” according to Byrne.

These underground ice sheets will not only play a role in hydrating the first settlers on Mars but, like the ice cores drilled from polar regions on Earth provide valuable information about the history of the climate, they will provide an insight to the planet’s past.

“If you had a mission at one of these sites, sampling the layers going down the scarp, you could get a detailed climate history of Mars,” says Leslie Tamppari, Deputy Project Scientist on MRO. “It’s part of the whole story of what happens to water on Mars over time: Where does it go? When does ice accumulate? When does it recede?”

This new discovery will help in future Mars missions and eventually the first manned mission to Mars.