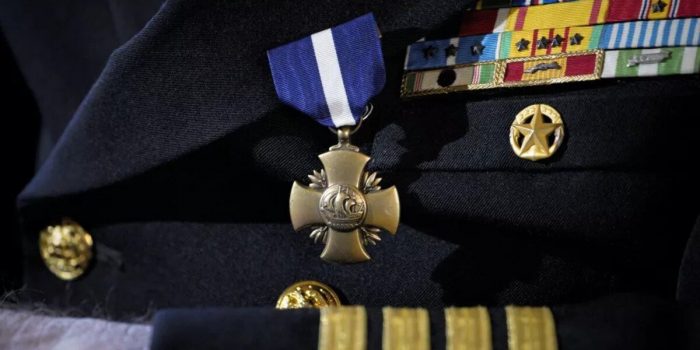 70 years ago, on a cold November day in 1952, Captain Royce Williams shot down four Soviet fighter jets – and became a legend no one would hear about. The now 97-year-old former naval aviator reportedly shot down the four Soviet MiG fighters within the span of a half hour during the Korean War but never received proper recognition until now.

He was told to keep the fight quiet to avoid escalating tensions and was quietly awarded the Silver Star the following year. But that wasn’t the end of the story.

At the urging of military and political leaders, Navy Secretary Carlos Del Toro visited San Diego Friday and gave the 97-year-old Williams an “upgrade,” awarding him the Navy Cross in front of about 400 people, including U.S. Supreme Court Justice Elena Kagan.

He also said that among the many proposals he has reviewed to upgrade sailors’ awards, Williams’ case “stood out above all others. It was very clear to me that his actions were truly extraordinary and more closely aligned with the criteria describing a higher medal.”

“Freedom does not come cheap,” Del Toro said. “It comes through the sacrifice of all those who have and continue to serve in today’s military. Your actions that day kept you free. They kept your shipmates free in Task Force 77. Indeed, they kept all of us free.”

The dogfight described occurred on Nov. 18, 1952, while Williams and three other Navy pilots were flying their F9F-5 aircraft along the Yalu River, a demarcation line between North Korean and Soviet territories. The Soviets were not directly involved in the Korean War, and the U.S. wanted to avoid an expansion of hostilities to avert triggering World War III. But things turned dirty when Williams and his fellow pilots unexpectedly encountered the Soviet MiGs — planes that were faster and more maneuverable than Panther jets. They immediately opened fire.

The attack and engine problems led three of the American pilots to quickly flee from the area. Williams got trapped and had to take on all seven MiGs. So began one of the longest dogfights in history, a 35-minute intense air battle that Williams survived with his unmatched flying skills and ability to bring the MiGs into his gun sights. Four of the MiGs went down.

California Rep. Darrell Issa, who pushed for Williams to get the upgraded medal, called him “a Top Gun pilot like no other, and an American hero for all time”. “It is to this day the most unique US-Soviet aerial combat dogfight in the history of the Cold War,” Issa said in a statement.