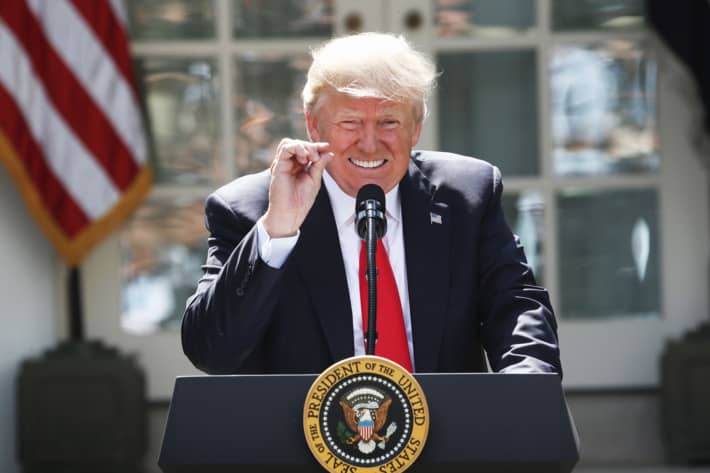 The US President Donald Trump has made a historic resolution of withdrawal from the Paris Climate agreement on Thursday. Ever since the president had suggested the idea of breaking off the agreement, it has been the center of criticism from many, including the Tesla CEO Elon Musk, who threatened to leave the president’s advisory council if it happened.

The goal of the Paris framework convention was to reduce greenhouse gas emissions (GHG), but the president has repeatedly said that climate change is a ‘hoax’ so this should not come as a surprise at all. Trump says that the Paris Agreement was “very unfair at the highest level to the US.” The president believes that leaving the global pact will give the workers and taxpayers a better way. He announced that America would renegotiate the climate change deal for fairer terms.

While Trump’s decision received support from the Republicans, it was condemned by many political leaders, environmentalists, and business executives all over the world. In his Rose Garden speech on Thursday, the president said that the “draconian” international deal imposed unfair environmental standards which could have an adverse impact on the businesses and workers. He added, “I was elected to represent the citizens of Pittsburgh, not Paris.”

The international climate agreement has been signed by 195 countries, to bind the world community together and fight the climate change. America is the second largest source of pollution in the world and its break off significantly reduces the effectiveness of the pact. Many corporate executives, climate activists, and even people of his own staff tried their best to change the president’s mind but to no avail.

The president has announced that he had made calls to the Britain, French, German, and Canadian leaders to give an explanation of his decision. A White House press secretary released a statement saying the president “reassured the leaders that America remains committed to the trans-Atlantic alliance and to robust efforts to protect the environment.” Within minutes of the US president’s announcement, leaders of France, Germany, and Italy issued a joint statement saying that the pact was irreversible and could not be renegotiated.

While the announcement for the break off has been made, it will not be effective until 2020, and the structure of the agreement says that the US president will have a chance to join the agreement back in 2020. Leaving the global pact means that America will not be able to participate in any global initiative for reducing GHG emissions. The country will have a hard time expanding its clean energy sector as the former US climate envoy Todd Stern said that the decision would affect the country’s international reputation terribly. A professor of environmental and international law at Stanford even stated that this would give China the global leadership on the issue for its commitment to the pact.

Donald Trump, on the other hand, believes that the Paris Agreement is unfair redistribution of American wealth to other countries, announcing that the US will become one of the cleanest countries despite leaving the climate accord.

The entire world, and more so are the Americans, in a state of disbelief as the major contributor of the GHG emissions pulls out from a very impactful climate framework.