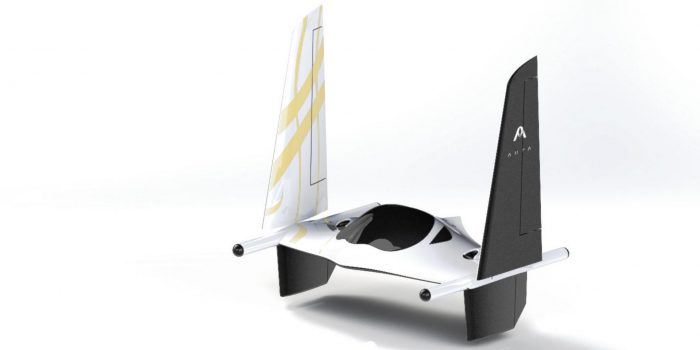 Aura Aerospace has proposed a crazy new take on advanced air mobility. The five-seat Ranger looks like Darth Vader’s shuttle when it’s folded up, but it promises to fly further than any normal airliner, with roof-to-roof vertical takeoff and landing.

The aircraft will take off vertically thanks to the coaxial octocopter system, with eight 70-inch (178-cm) two-bladed props hanging fore and aft of the large main wing. The system gets you on and off the Vertipad, and once you’re airborne and the wing is folded out to its full 23-meter (75-foot) width, a pair of turbofan jet engines generate forward thrust.

Once in cruise flight and fully supported by the wings, the propeller comes to a halt, aligns itself with its support strut, and moves back slightly to cover them for minimal drag. Retractable pontoons are deployed. With the props in place, the Ranger is free to accelerate to its monster cruise speed of 820 km/h (510 mph; Mach 0.66), which is slightly slower than most airliners because it can cruise at 10,000 ft (1,000 m). 30,000 feet) cruises through the thick air (9,150 m).

Aura claims that with a full tank of sustainable aviation fuel, the Ranger has a range of 18,000 kilometers (11,185 miles) or 22 hours of nonstop flight. A typical Airbus A380 can fly a maximum distance of 14,800 km (9,200 mi) while carrying passengers. Ranger promises to transport you with juice from the top of a building in New York City to the heart of Adelaide, Australia. And if the juice runs out, Aura claims the thing will still glide and can happily take off or land on any runway.

The Ranger is an intriguing concept, and it has the potential to improve the lives of the very poor. However, its reliance on aviation fuel, whether sustainable or not, means that its days are numbered before it even takes off, and the path between these renders and FAA-certified commercial manufacturing is excruciatingly long and exorbitantly expensive. We’d love to see a fly at full size, but we’re not optimistic.