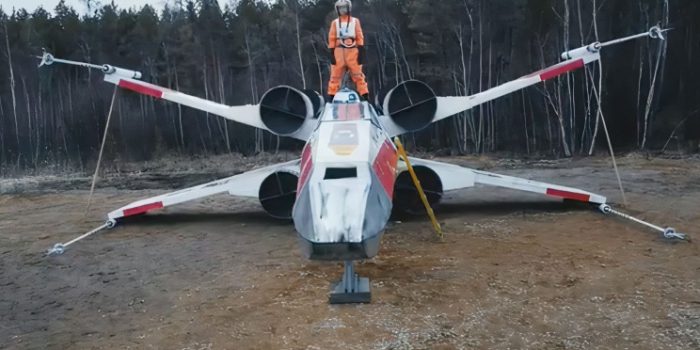 Star Wars seems to be an evergreen fandom and people will never get over its greatness. The versatile X-wing of the Rebel Alliance is one of the most memorable aircraft from the popular universe with its X-shaped wings that have four laser cannons.

Coming from Yakutsk, Siberia, a Russian team of Star Wars fans built a life-size model of the legendary fighter, and it has intrigued every Star Wars fan.

The team was headed by Ayaal Fyodorov and it took three months with a budget of $5,000 to make the wings. They recorded the entire process with time-lapse videos where the six members of the team are working on the 42-foot (13-meter) aircraft where each piece was intently built before their final assembly.

They even added a droid slot for R2-D2 in the build. It was made out of plywood, the X-wing was placed in a park in Yakutsk where it will be on public display.

Speaking to Reuters about the project, model maker Ilya Burnashov said, “I think the main task here was to make our dreams come true because all [members] of our team are great Star Wars fans. It means a lot to see your dream come into real life. Also, to bring joy to people, now everybody can come here to the park, take pictures, touch it, see what it’s made of, and get some positive energy.”

Earlier this year in March, the same members also created a model of Din Djarin’s ship the Razor Crest from the popular spin-off series The Mandalorian.

Ayaal Fyodorov told Reuters about their future plans saying: “Our next project? Of course, our dream is to build the Millennium Falcon. We haven’t found sponsors yet, but if we do, we’ll make it. A life-size copy.”