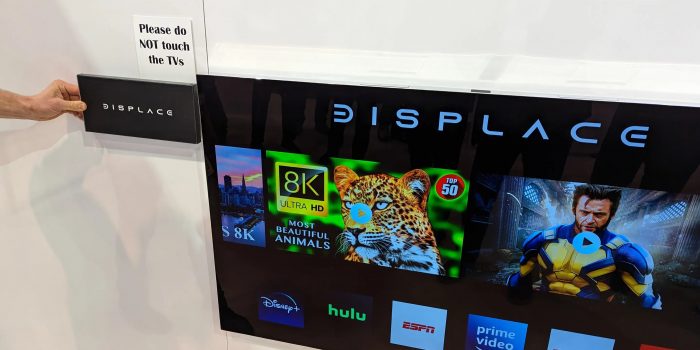 CES 2023 had the honor of unveiling a brand new DisplaceTV, an unusual OLED Smart TV eliminating for the first time all power cables and even the remote itself. This DisplaceTV can attach itself to a wall without the need for a wall bracket too. This company, known as Displace, is an in-home entertainment startup and claims to be the future of OLED TVs.

Unlike anything else on the market, Displace’s 55″ 4K TVs are super lightweight, transportable and can be easily secured to any surface with no mounting required, using proprietary active-loop vacuum technology. Multiple Displace 55″ 4K TVs can be combined together to create any size TV – such as combining four TVs to create a massive 110″ TV.

Impressive gesture controls of DisplaceTV uses the ability to use your finger as a mouse to select particular on-screen channels/options, plus a fancy two-handed flourish to enlarge what’s on one screen to fill all four. In addition to gestures, you’ll also be able to control the TV with voice, touch and an app. Displace installs four proprietary batteries that should last up to 180 hours between charges. In other words, Displace claims that the batteries will last for a month when using its TV for 6 hours per day. Assuming the Displace TV offers the same power efficiency as other OLED Smart TVs, it would need to pack approximately 15 kWh worth of batteries.

The display receives all its content from a separate base unit, into which you can plug all your video sources (i.e., cable and streaming boxes, gaming console, Blu-ray player, etc.) somewhere else in the room. Thus, your movies and shows stream from that box (potentially hidden from sight) to the actual display(s). In fact, a single base unit can send a signal to up to six different DisplaceTVs.

It can be carried anywhere around your house weighing less than 9kg and stick it to almost any smooth surface whether it be glass, concrete, or drywall. The vacuum seal that connects to any surface requires power from the batteries and if you forget to charge them, the app will notify you if the unit is in any danger of falling.

“We [had to] think backwards to see what things are required to actually get to this mission,” the company’s Founder & CEO, Balaji Krishnan revealed at the company’s booth at CES. “And we wanted to remove all the friction points that people have with the biggest display you have in your home, which is television.”

The TV itself is still in the prototype stage but the company currently expects to ship a limited number of DisplaceTVs in December 2023.