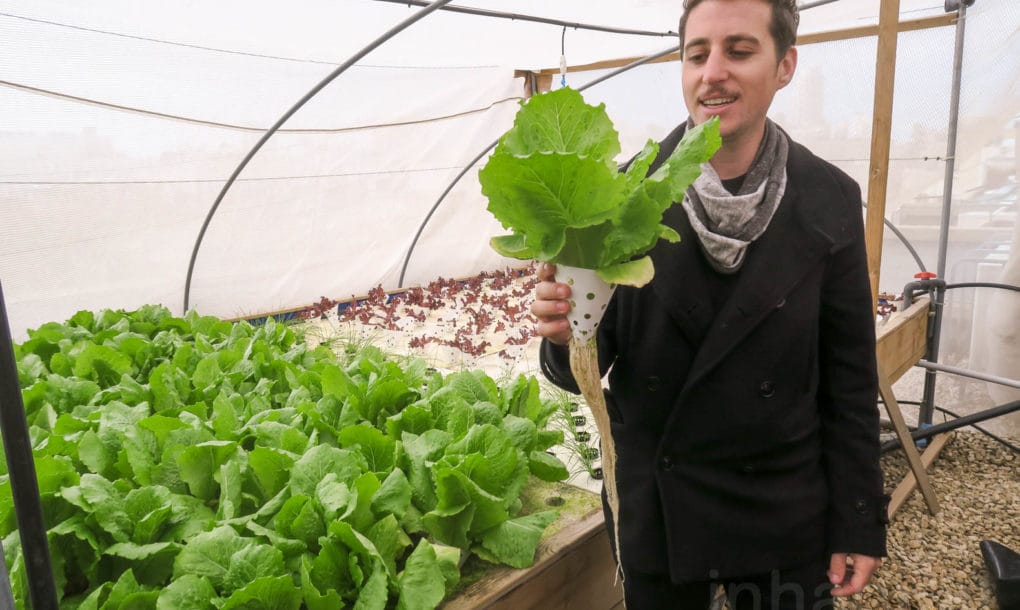 Rooftop gardens have become a trend for people who want a lawn but don’t have enough space outside their homes. It is also a good way to grow some fresh fruits and vegetables clean from all the harmful pesticides and chemicals. Based on the same concept of rooftop gardens, we are featuring something spectacular today. Hiding away on the roof of Israel’s oldest mall in the heart of Tel Aviv, “Green in the City” is a massive rooftop farm producing over 10,000 heads of different plants all around the year via purely organic and hydroponic methods.

This project is just another urban agriculture project out of a number of sustainable initiatives present at the Dizengoff Center shopping mall. The efforts include a tree nursery, bird habitats, a rooftop apiary, and even a human-made cave for native fruit bats to live and thrive.

These urban agricultural projects are quite useful as over 54 percent of the world’s population live in cities, with the numbers expected to grow up to 66 percent by 2050, according to the United Nations,

To cater for the large food requirement, for the survival of increasingly urbanized population drove the creators of Green in the City to initiate the project. The rooftop farm was launched in 2015 by Lavi Kushelevich, who has also created his hydroponics company LivinGreen and works at the Dizengoff Center’s sustainability department.

And it seems that the project has been a huge success, with the farm growing over 10,000 heads of leafy greens per month throughout the year. The farm includes 17 different kinds of vegetables and herbs growing inside two greenhouses built over an area of 750 square meters.

The vegetables grown from seedlings use a Deep Water Culture foam raft system for cultivation.

Roots grow through holes in the floating foam rafts and provide the water while blocking sunlight. An air pump is installed to oxygenate the water and control the pH and nutrient levels.

These soil-less hydroponic farming could be the real deal, as they produce vegetables that are grown twice as fast and waste less spoilage, consumes less water usage and land when compared to traditional agricultural techniques.

The company also holds workshops aimed at teaching how to build and use hydroponic systems at home. They discuss how to cook the fresh greens, like bok choy. Along with a demonstration of Deep Water Culture Systems and Nutrient Film Technique which includes vertical and horizontal PVC piping systems; the workshops aims to teach the creation of home biogas unit and design a compact Living Box greenhouse. It is also giving out small-scale hydroponic home starter kits.

The company LivinGreen funds the initiative by selling the hydroponic system to both home and commercial user. They also sell everything grown at the farm, which includes Tel Aviv restaurants and homes, taking the orders online and delivering shipments by bicycle.

As few people are needed to maintain the farms, high-quality organically grown eatables such as chives, lettuce, basil, and celery are sold at lower than market prices.

The company employs an honor system, where people are allowed to take whatever the need and have a choice between pay or leave without paying. Lavi says about 80 percent of individuals do pay, which has inspired him to install more Honesty Stands in the future.

The young initiative that is Green in the City rooftop farm has indeed sown seeds for great success. This type of simple, efficient and environment-friendly initiatives are the very thing we need to make our world a more sustainable place to live.

The initiative now looks to expand their horizons, with the first step being taking the farm to the ground-floor of Tel Aviv’s Sarona Market.

What are your thoughts on this hydroponic farm? Comment below!