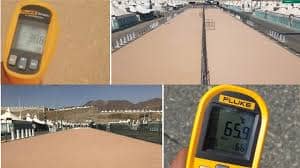 Millions of pilgrims are making their way to the Holy City for the sake of performing the annual pilgrimage that is known as Hajj. With this in mind, the Saudi Government is doing all that it can for comforting and securing the pilgrims as they move between the Holy sites.

The Director-General of the two Holy sites and seasons, Ahmad Manshi has claimed that in order to make sure that pilgrims remain safe and comfortable; a project in collaboration with the Japanese corporation, Sumitomo, has started. The project will be applying a heat-blocking coating to the pavement surface in the pedestrian pathways at Holy Sites.

Manshi has said that the project is being carried out by Sumitomo and that coordination with the custodian of the Two Holy Mosques has been carried out as well. Institute for Hajj and Umrah carried out research for studying on this experiment and gave its recommendations about the possibilities of expanding to other locations. Manshi has also stated this project is a sequel to the completion of a network of pedestrian pathways that ran from Jabal e Rahma in Arafat to Mina while passing through Muzdalifah. The project will be reducing the temperature by 15-20 degree Celsius.

The temperature will be recorded every ten seconds during the ceremony of Hajj using sensors that will be installed under the asphalt. It has also been said by Manshi that in order to gauge the success of this project, surveys will be conducted of pilgrims this year.