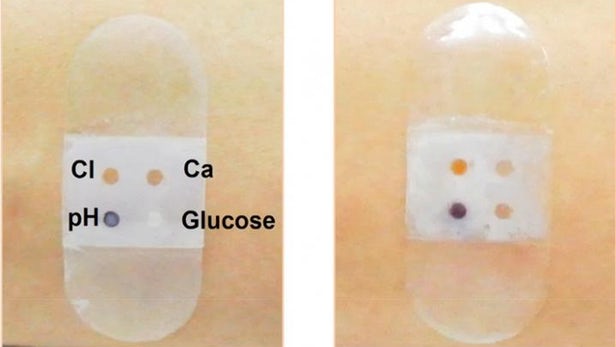 Do you like needles? Yeah, there is something scary about them alright. But what do you do when you need to give a blood sample? There has been no way of finding an escape to such situation, up until now. A recently developed biosensor is capable of collecting sweat from the skin and analyzing it, thus ceasing the need for taking a blood sample.

The bandage-like biosensor is economical and doesn’t feature any sort of electric components, thereby simplifying the whole process. The biosensor has been developed by a team of scientists from China and the US. It features an adhesive-backed flexible polyester film that has been coated using a super-hydrophobic (water-repelling) silica suspension. The coating features four small super-hydrophilic (water-attracting) wells.

Once this biosensor is attached to the patient’s skin like a bandage, the perspiration is channelled into the microwells and is collected in them. The wells also have dyes at their bottom, and they subsequently change colour based on the pH level, the concentration of chloride, glucose, and calcium in the sweat.

Once this has been achieved, a smartphone app and camera are utilized for assessing the colors of the dye and then providing the patient with a readout of the four parameters that have been mentioned above. The data obtained from the sweat correlates to the levels that are present within the body of the patient. The biosensor was used on a volunteer who perspired while working out. The app then determined that the sweat had a pH level ranging between 6.5 and 8.0, chloride concentration of 100 mM (nanomolar), and trace amounts of glucose and calcium.

The team is comprised of scientists from the University of Science and Technology Beijing, the Chinese Academy of Sciences, the California Institute of Technology, and the University of California-Davis. They are currently figuring out how to enhance the sensitivity of the biosensor. A paper on their research has already been published in the journal Analytical Chemistry.