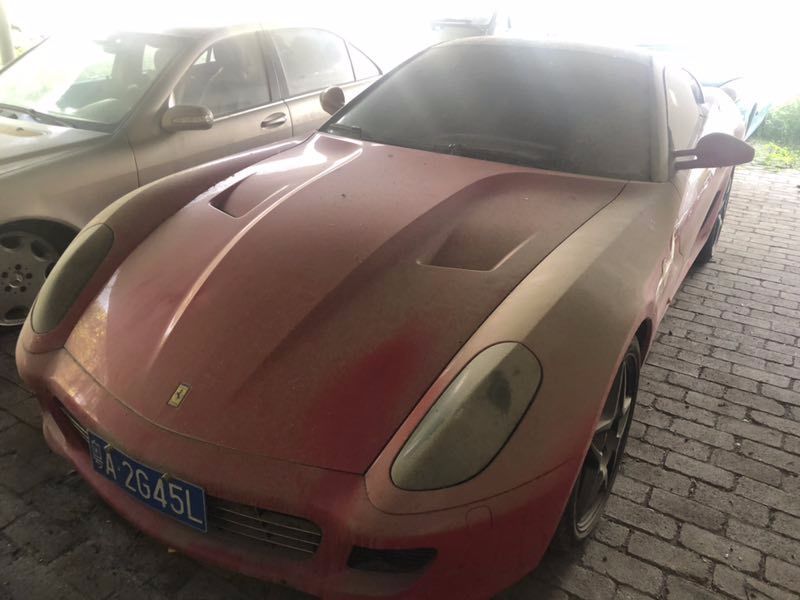 Everyone dreams of owning and driving a Ferrari. In fact, a Ferrari is the quintessential example of a ‘dream car’. Of course, a Ferrari can put quite a dent in your wallet, and not just a fender bender, mind you, because usually a Ferrari can cost hundreds of thousand of dollars. But not this one.

Authorities in Dongguan, China are listing a Ferrari 599 GTB for sale for just 1,701 yuan ($245) after it was involved in an accident and came into their possession. Clearly, this price also means that it comes with a few caveats, the most obvious of which is that it can’t be legally driven in the country because it has a fake number plate and no registration.

As can be seen from the pictures, the Ferrari has a thick coat of dust on it and has seen better days during its lifetime. But hey, its still a Ferrari that can be yours for just 250 bucks. Can’t really shy away from that, can you?

For some perspective, the 599 GTB is one of Ferrari’s most popular models, comes with 6.0L V12 engine which produces a total of 612hp and cost nearly $300,000 when it was initially released. Not only that, but it also has the signature Ferrari hallmarks such as the interior and exterior of dreams. A little maintenance is just a small price to pay for all that oomph, right?

The Ferrari goes up for sale next week and has reportedly already attracted quite a few number of buyers, with 250 applications already coming in. Potential buyers should note, however, that it has to be transported out of the country to actually be driven, since it has no legal documentation in China. Legally doing that can cost much more than $250 dollars and that is something to be wary of before putting in a bid.

Is it worth going all the effort to bring this car into drivable condition, just to tell everyone that you bought an actual Ferrari for just $250? Let us know in the comments below.