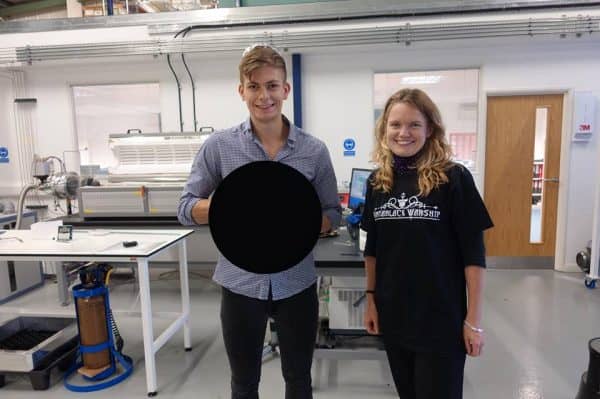 Things that the world’s blackest black color can be used for are appalling! Vantablack, or in other words, the color of my soul, was first made into a spray paint a few months back leading to some pretty awesome artifacts. Now a series of pictures with people holding a circular disc painted with the material are creating an online wave, as the disc gives an illusion of being a work of photoshop editing.

Vantablack was developed by UK-based Surrey NanoSystems three years ago and has been part of many scientific and artistic pieces ever since. The pigment is created out of a series of microscopic vertical tubes trap any kind of light between them, thus absorbing 99.96 percent of it and making any three-dimensional object painted with it look like a black two-dimensional flat surface.

According to Artnet, the latest pictures showing the wonders of the Vantablack are actually of a three-dimensional bowl, but the sheer blackness of the color make it seem like a flat black circle.

“If you see it on a flat surface on its own, with no other black material to reference it against, it just looks like a black velvet surface,” Surrey NanoSystems chief technical officer Ben Jensen told ABC. “If you see it on a 3D object, like crinkled foil, the coated side still looks like a black two-dimensional flat surface. It’s only when you turn it around and you realise that it’s got a lot of dimensionality, that you grasp how different it is.”

The color is so unique that when other conventional black surfaces are placed next to it, they seem mild and gray. Surrey NanoSystems have been working to make Vantablack even darker, and last year they managed to create the pigment so dark that it couldn’t be measured even with UV-VIS or MID-IR spectrometers. The video below shows how they shine a high power laser pointer across a surface coated with Vantablack 2.0, but the laser vanishes like it wasn’t ever there!

Artists have been falling heads over heels for the color, until a certain Anish Kapoor managed to win exclusive rights from Surrey NanoSystems to work with the color, leading to much anger among the artists. In fact, this led to a very interesting feud between Anish Kapoor and another artist Stuart Semple, who created the world’s pinkest pink and publicly made it available for every except Anish Kapoor.

Describing Vantablack, Kapoor told Artnet that it is

“the blackest material in the universe after a black hole. It’s literally as if you could disappear into it.”