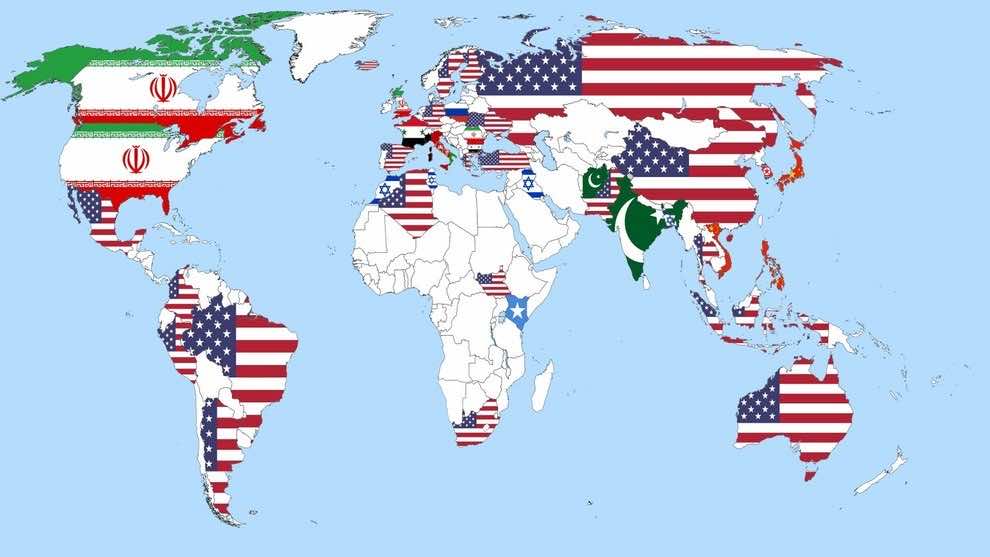 Most of us have this stereotypical view of the world where mostly Europe and the US is seen as the developed first world, and the rest of the world just has more problems and Africa is probably the worst place to live. While some of the opinions are factually correct, there is a lot more to the world that we care to observe. Here are some maps that will give you a new perspective on how the world works and what really are the differences in people around the world.

If we were to make a guess as to where the life expectancy is the lowest, most of us would be right. Africa is the only continent with nations having an average life expectancy under 60 years. There are 28 such countries in the continent, with the lowest in Sierra Leone at 26 years. According to the data published by world health organization, people live the longest in Japan with the life expectancy of 84 years. Considering the history of nuclear strikes on the country, this is kind of surprising.

While some of us might imagine that the Chinese are the hardest working people around the world and that most probably is true. The map shows the documented working hours for most countries around the world. Mexico stands at the top and trailing closely behind are Costa Rica and South Korea. The map offers no information on Africa and most Asian countries. Relying on this data, we can not say much about the work hours in Africa, but given the accounts of slavery in a lot of African nations, we can easily expect these to be much longer than that in Mexico.

This one will not be bringing you much of ‘new perspective.’ Since it is not very common to have a woman lead a state, most of us are actually aware of the handful of places where women hold the highest office. While we expect this to happen in the first world, there are some in Africa that might be surprising like the Ellen Johnson in Liberia, and the Prime Minister of Namibia Saara Kuugongelwa.

Never Had A Female Leader

Well, the last map was not insight enough into the gender gap in world leadership. The following map shows the countries that have never had a female leader and the results are kind of surprising. While we might expect the less developed countries or rather conservative like India, Pakistan, Bangladesh or most of Africa to be left behind, the truth is a bit different. It is the United States of America and the entire Russia, the once superpower of the world that have never had a female leader in history. It is kind of surprising that most of the South American nations have actually had female leaders.

The international media spreads irrational fears in people. While some of them are reason based, others are just pointless. For a person with a British passport, the foreign office advises them to not travel to a lot of African countries, and none of Afghanistan, Iraq, Syria, and Tajikistan. While the entire North Africa has been declared safe for a Briton to travel, some places in the South American countries Colombia, Venezuela, and Ecuador have been called unsafe. China, South Korea, Indonesia are completely safe, but you will have to be pretty choosy if you need to travel to the rest of Asia.

The Number of English Speakers

If were to rely on language stereotypes, where would most English speakers be? Duh! Nothing gets more English than England. New Zealand has the highest percentage of English speakers, and the UK, USA, and Australia are all pretty close. The surprise comes from Canada where less than 90 percent of people speak English which is even less than Norway and Sweden. Nearly no Chinese speak the language at all, but about half the Pakistani population can speak English, something that most people may not imagine. Some Arab countries like Jordan, Egypt, Iran have a surprisingly high percentage of English speakers.

What would you consider to be a place that gives a human most personal freedom? The US may sound like the place with most freedom and Saudia Arabia with the least, and the actual results are only slightly different. Some African countries offer even lesser freedom than the Saudia Arabia does, and Canada offers the most of it. The US offers much less freedom than Sweden of Australia.

There are some stereotypes about this, and a lot of them do stand true. The map shows Asia to be the most polluted continent, with Pakistan on the top. The United States, Canada, Argentina, and most of the Europe has the lowest concentration of particulate matter in its environment.

If you had a good look at the previous maps, you should not find it hard to correctly guess the places with most terror threat. You might not consider the US to be on the list where there is general terror threat but it is. Japan, North Korea, Poland, and some of the African countries like Angola and Namibia have the lowest chance of a terror threat.

This one fits the stereotypes pretty well too. You will see most gender equality in Europe, slightly less in Canada, Australia, and the US, and the least in some Arab countries, African countries like Morocco and Algeria, and the situation is pretty similar in most of South Asia.

Is coffee the universal beverage? No person on the planet can imagine living without it? It looks like that is the case only in most of Europe, Canada, the US, and obviously Brazil. The rest of the world doesn’t care much about it, and the best source of caffeine is probably tea for them.

Owning a gun is a difficult thing for citizens in most of the world, but the memes that you see circulating about people with guns in the US are not too exaggerated honestly. 112 guns for every 100 residents, really? What do people do with them?

This is easy. The Arabs are most religious, right? Well, they are, but only closely behind the African nations like Niger and Mauritania. The South Asians are no less, but China, most of Europe, and Canada has a little number of religious people.

Look through this and find where your country stands.

None of the results on this map are very surprising except India. The country actually has the second largest road network in the world, at 4,689,842 km leaving even China behind.

The biggest and most populous countries of the world have the longest railway networks, and USA, China, Russia, India, and Canada are among the top 5.

If you are a person interested in world heritage, this map will be much help to you. Italy, China, Spain, and France are at the top. So you get most of the pleasure from Heritage site visits in Europe, but while you are in Asia, India holds 32 world heritage sites as well that are well worth visiting.

The US is at the top. Given the population and the wealth of the country, it is not much of a surprise. While we are at the population, China stands only second in the number of frequently flying citizens, and next goes Canada.

The map shows the countries at the highest risk of natural disasters like earthquakes, storms, floods, and droughts keeping in view how well prepared they are to deal with the matter. Europe is generally free from the disasters, and the highest threats are in Asia, and Africa and a few countries of South America.

This map shows the urban population of each country as a percentage of the entire population. There are only seven places where 100 percent of the population lives in Urban areas, and they are Hong Kong, Singapore, Bermuda, Macao, Cayman Islands, Sint Maarten and Monaco. The least of the urbanized population is from Asia, particularly South Asia, and a slot of Africa.