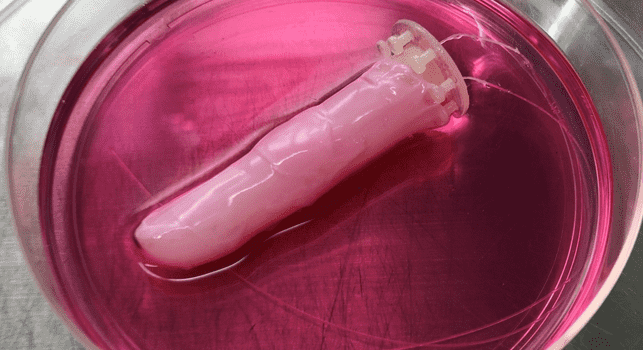 Scientists must construct an artificial version of every human feature if they wish to deploy realistic humanoid robots. And our human skin is essential to our lifelike appearance.

As a result, Japanese scientists stated Thursday in the journal Matter that they’ve made some progress in this area. They demonstrated a robotic finger coated with “living skin,” a prototype of skin made of actual, living human cells.

“I think living skin is the ultimate solution to give robots the look and touch of living creatures since it is the same material that covers animal bodies,” Shoji Takeuchi, a professor at the University of Tokyo, said in a statement.

This material looks and feels like human skin since it is constructed of natural skin cells. It can also self-heal and repel water. When attached to a robot, this type of skin sheet can cure its own cuts and scrapes, just like normal human skin.

Even though Takeuchi says the team is “surprised by how effectively the skin tissue conforms to the robot’s surface,” the researcher cautions that “this work is just the first step toward producing robots covered with living skin.”

The newly produced robot skin is still not as tough as normal skin and requires extra assistance to maintain itself. The study team also plans to include hair follicles, nails, and formal sweat glands in the future.

However, Takeuchi remains focused on the primary reason for creating such human-like robot skin. The silicone skin now used in constructing artificial humans cannot replicate human form. Therefore, to promote both likability and kinship, making them as human-like as reasonably possible is essential.

It’s a challenge that necessitates deviating from the standard and inventing in a new way. Silicone skin, for example, cannot produce fine nuances such as flexible pores or wrinkles that occur with age.

The scientists took a regular robotic finger and submerged it in a cylinder filled with a specific fluid that fostered the proper conditions for natural skin to grow.

This solution contained collagen as well as “human dermal fibroblasts.” These fibroblasts are simply the skin cells employed by the researchers. The collagen and fibroblast mixture shrank around the robotic finger, wrapping it tautly like a skin primer. This was the skin’s initial layer.

“The finger looks slightly ‘sweaty’ straight out of the culture medium,” Takeuchi said, adding that “since an electric motor drives the finger, it is also interesting to hear the clicking sounds of the motor in harmony with a finger that looks just like a real one.”

Although the team’s prototype is still in its early phases, it has the potential to be a significant step forward for next-generation robotics. The team believes that by incorporating sensory neurons into their living skin concept, they may one day venture into the mental aspect of humanoid robotic building.