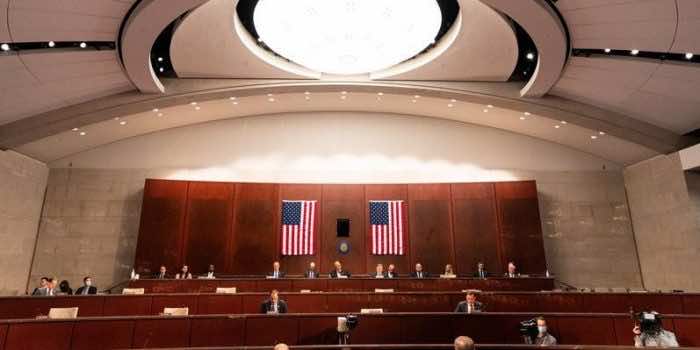 Congress convened its first public hearing on UFOs on Tuesday, with top US intelligence officials and members of Congress from both parties agreeing that unexplained aerial phenomena (UAPs) are real; however, they remain a mystery.

The House Intelligence Subcommittee on Counterterrorism, Counterintelligence, and Counterproliferation, also known as the C3, held an open hearing on the unexplained aerial phenomenon (UAPs) followed by a closed, secret session.

Members of the committee stated from the commencement that the government was keen to start a new chapter in terms of investigation and transparency.

“For too long, the stigma associated with UAPs has gotten in the way of good intelligence analysis. Pilots avoided reporting or laughed at when they did,” said subcommittee chairman Rep. Andre Carson in his opening remarks.

“Department of Defense officials relegated the issue to the backroom or swept it under the rug, entirely fearful of his sceptical national security community. Today, we know better. UAPs are unexplained, it’s true, but they are real.”

Officials from the Pentagon were candid about how much they still don’t know, mainly because of the challenges of acquiring high-quality data. Scott W. Bray, the deputy director of naval intelligence, showed previously classified footage of a reflecting spherical object that appeared to be a flash of light whizzing near a military fighter plane.

“What are we seeing?” queried Rep. Adam Schiff, chairman of the House Intelligence Committee, as a Pentagon official attempted unsuccessfully to pause the footage at the same moment when the object emerged during the encounter.

“What you see here is aircraft operating in a U.S. Navy training range that has observed a spherical object in that area,” said Bray. “And as they fly by and they take a video, it looks somewhat reflective in this video, and it quickly passes by the aircraft’s cockpit.”

“And is this one of the phenomena we can’t explain?” asked Schiff.

“I do not have an explanation for what this specific object is,” said Bray.

A preliminary report detailing 143 UAP sightings dating back to 2004 was provided last year by the Office of the Director of National Intelligence (ODNI).

“The limited amount of high-quality reporting on unidentified aerial phenomena (UAP) hampers our ability to draw firm conclusions about the nature or intent of UAP,” concluded the unclassified report, which many decried as a nothing burger after intelligence officials admitted they didn’t know what the vast majority of phenomena were.

However, the amount of data collected is improving. In addition, the military’s efforts to reduce the difficulties associated with reporting UAPs have increased reports. According to Bray, the database of UFO claims has more than doubled in the last year to around 400 instances. However, increased quantity has not resulted in improved quality.

“We have insufficient data either on the event itself, the object itself or insufficient data,” said Ronald Moultrie, the Under Secretary of Defense for Intelligence & Security. “So it’s a data issue that we’re facing.”

The authorities found no proof of aliens, according to the 2021 report. During Tuesday’s session, Mr Bray reaffirmed that finding, telling legislators that “the UAP task group doesn’t have any wreckage that isn’t explainable, that isn’t consistent with being of terrestrial origin.”

The Pentagon’s top intelligence official, Moultrie, stressed the importance of striking a balance between transparency and national security.

“Our goal is to strike that delicate balance,” he said, “one that will enable us to maintain the public’s trust while preserving those vital capabilities to support our service personnel.”