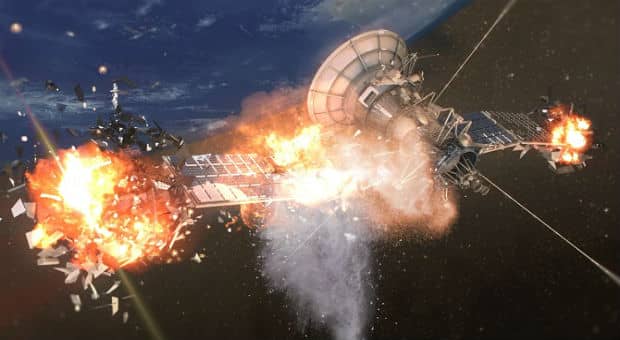 If you are a movie fan or a gaming addict, at one point or another, you might have wondered, if there is some space warfare that might be going on. So let us see, if our thought is just an impossible imagination, or is there any truth to our heartfelt destructive desires.

It is pertinent to note though that Space Warfare does not entitle activities that use satellite for surveillance, espionage, or military communication. Spy satellites are in use, since the dawn of space-age, and although many Sci-Fi fans and some agencies would love this Space Warfare to be a reality, however, Outer Space Treaty may not allow you to do such. More on what is allowed and not, is discussed here. You can also see the video below

If you want to know about the developments being carried out for the militarization of space, visit here.

The US has already tested shooting down satellites

What Space Warfare does entitle, are the weapons that can obliterate space systems, e.g. satellites, disabling of missile midway through space, and targets on Earth. These arms were in development during Cold War and may be in development today. There have been testing of the Terrestrial-type weapon by Russia, where Soviet space station  Salyut 3 used a 23 mm cannon at ranges from 1,600-9,800 feet or 500-3,000 meters, to test fire at target satellites.

Since 2008, Russian astronauts carry small-arms on each Soyuz vehicle on ISS, which is a part of emergency landing survival kit.The handgun is there in the case of emergency evacuation of International Space Station ISS which may cause an off-course landing in the wilderness somewhere on the earth. In that case, the astronauts will have some protection against wild animals.  Earlier, it was a Makarov 9mm pistol, but now it has been replaced by TOZ-82 survival gun. The decision lies with the crew whether to carry a weapon or not.

More interested to know about the weapons that have been carried to Space? Visit here.