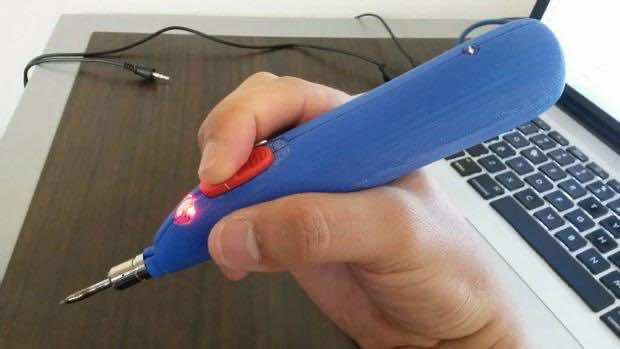 Soldering irons are a must have if you work with circuits and other electrical components. However, with the technology progressing at such a rapid pace, it is next to impossible to still rely on a mains outlet to execute soldering. For the tech guy on the go, even carrying batteries and chargers is tiresome. This is where the Solderdoodle comes in with the notion that what is practical for the smartphones/tablets will also hold practical for soldering irons as well; it can be charged via standard USB cable. Solderdoodle is 7.4” in length and has been built around a battery (lithium ion) that is capable of being charged via USB port. So you can either make use of a laptop, mains adapter, USB battery or even a USB solar charger with a standard USB 2.0 type A connector. As per the developers, the device can be charged fully within three hours and is capable of working for hours on a single charge. The Solderdoodle employs the use of a maximum high-efficiency, high-power charge controller. The soldering iron tip that is embedded in it is the standard pin and you can easily replace it with any other. As far as the body of this gadget is concerned; it is 3D printed. The project will begin its fundraising campaign on Kickstarter this August whereas the best part about this whole project is the fact that it is open source and you can find the plans at www.instructables.com. This will facilitate the improvements that the device requires on different aspects such as its temperature range (currently it can only make up to 260º C that is not enough to tackle non-leaded solder). The gadget has been developed by Portland, which is an Oregon-based start up and makes use of the hardware from the solar USB charger that the company launched but didn’t turn out to be a successful venture. As per the developers, the Solderdoodle is still in prototype stage and the company still has to release a product version once the shortcomings are overcome. The creator of Solderdoodle, Isaac Porras, says; ‘Solderdoodle is something the maker community has been looking for; a soldering iron that can be used far away from a wall socket in tight spaces with enough power to complete most Arduino type projects with leaded solder’.