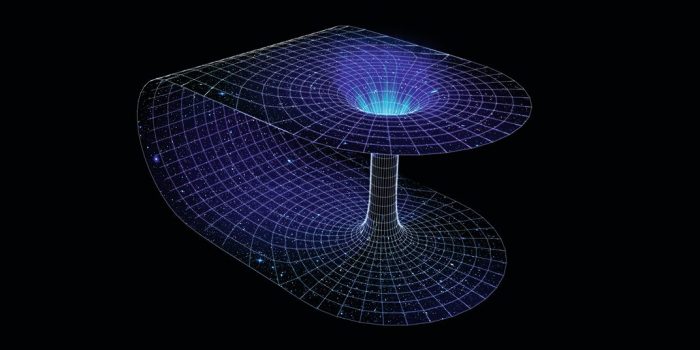 Researchers have used Google’s Sycamore quantum computer to simulate a simplified wormhole for the first time and send a piece of quantum information through it. A wormhole is a theoretical passage that creates shortcuts in space-time. While this tunnel is not through actual space, scientists made it by simulating two black holes in the system, one on each side, and using it to “teleport” messages. The holographic wormhole will be the first time scientists can analyze how the passage would work since the idea was proposed nearly 100 years ago.

A wormhole is a type of bridge that could form when space-time is folded. Space-time is the 3-D “fabric” that makes up space, which can be warped and distorted. The passage is described as a structure that connects two distant parts in spacetime, acting as a shortcut from one to the other. The points could be billions of light-years apart. While Albert Einstein and physicist Nathan Rosen are known for proposing the theory dubbed Einstein-Rosen bridges in 1935, the idea was first shared in 1928 by German mathematician Hermann Weyl.

While an actual wormhole would be powered by gravity, the holographic creation used quantum effects, New Scientist reports. The team used a qubit—the quantum equivalent of a bit in conventional silicon-based computers—and observed it travel to the next system.

The qubit moved through quantum teleportation, a process by which information about quantum states can be sent between two distant locations by quantum entangled particles. The particles interact and share their physical states for an instant, no matter how far the distance separates them.

Alexander Zlokapa, a former undergraduate student at Caltech who started on this project for his bachelor’s thesis, said in a statement: “We performed a kind of quantum teleportation equivalent to a traversable wormhole in the gravity picture.” To do this, we had to simplify the quantum system to the smallest example that preserves gravitational characteristics so we could implement it on the Sycamore quantum processor at Google. The physicists report that wormhole behavior acted as expected from both gravity and quantum physics perspectives.

Since the quantum system used in the experiment is rather small, it does not teach us anything that we do not know or compute something that is not possible with the computation power at our disposal these days. Nevertheless, it sets the stage for future work in this direction and would help us test theories of quantum gravity, where both general relativity and quantum mechanics can be studied together.