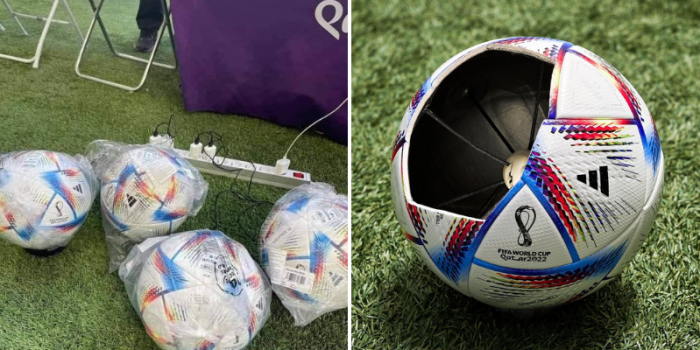 FIFA and Adidas, the official ball sponsor, presented the Al Rihla, a high-tech football with a 14-gram sensor inside that enables it to be tracked in real-time and pinpoint its exact location at any given moment of the game. This technological advancement was presented for Qatar 2022 with the idea of making the sport better and having even more fair decisions on the field.

A new Adidas Suspension System in the center of the ball hosts and stabilizes a 500Hz inertial measurement unit (IMU) motion sensor, which provides unprecedented insight into every element of the movement of the ball while making this technology unnoticeable for players and not affecting its performance whatsoever. The sensor is powered by a rechargeable battery, which can be charged by induction.

This allows the ball’s location to be as exact as possible when judging goals, offsides, and many other plays, proving to be a helpful tool to add to the Video Assistant Referee or VAR. Fans started questioning why World Cup balls were being charged before the match, and this is due to the sensor inside only being powered by a small battery that lasts around 6 hours of active use.

Maximilian Schmidt, the co-founder of KINEXON, who developed and produced the sensor, described its operation and even claimed that it captures the ball at a rate of 50 frames per second whenever it is impacted. The sensor weighs 14 grams.

“Data is sent in real-time from sensors to a local positioning system (LPS), which involves a setup of network antennas installed around the playing field that take in and store the data for immediate use. “When a ball flies out of bounds during play and a new ball is thrown or kicked in to replace it, KINEXON’s backend system automatically switches to the new ball’s data input without the need for human intervention.” Schmidt shared.