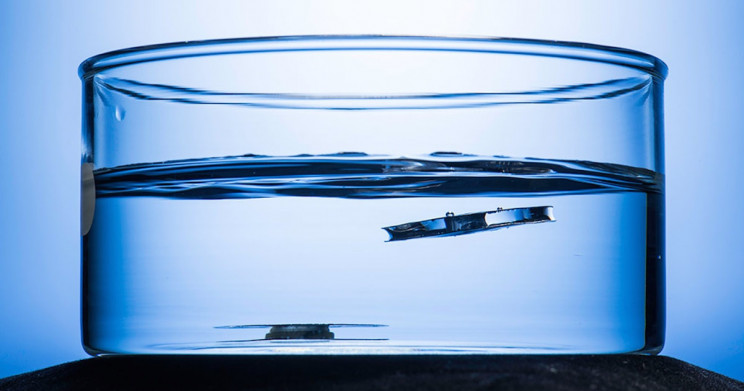 Wouldn’t it be great if we had ships or floatation devices were unsinkable even when they were punctured? This idea might become a reality soon enough thanks to a team of researchers from the University of Rochester. The team has managed to create an unsinkable metallic structure by taking inspiration from diving bell spiders and rafts of fire ants.

The team was led by Chunlei Guo, a professor of optics and physics from the University of Rochester. The team has managed to develop a groundbreaking technique for creating the unsinkable metal. The team made use of femtosecond bursts of laser for creating the surface of the metal with particular patterns that are capable of trapping air, thus making them water repellent.

This particular approach, however, was feasible for only a while since, after being submerged in water for a while, the structures would end up losing their floating powers. That is where the ants and the spiders make their entry into the equation. Both of these insects are capable of remaining afloat for long periods of time. This inspired the researchers to come up with means of trapping air in an enclosed area similar to diving bell spiders and fire ants. Guo said, ‘That was a very interesting inspiration.’

The researchers wrote in their paper, ‘The key insight is that multifaceted superhydrophobic (SH) surfaces can trap a large air volume, which points towards the possibility of using SH surfaces to create buoyant devices.’ The team was successful in creating a structure that relies on two parallel aluminum plates that face inward. This allows the plates to be enclosed and prevent any wear and tear from happening based on external factors. The plates are also kept at an optimal distance, thus allowing them to trap enough air between them to enable them to remain afloat.

The results were impressive; the structures were kept completely submerged for two months, but upon freeing them, they bobbed right back up to the water’s surface. Guo said, ‘the etching process could be used for literally any metals, or other materials.’