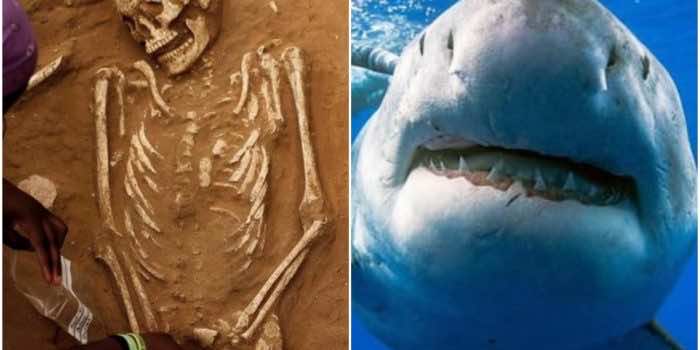 Encounters with sharks and the attacks by sharks are one of the most dangerous and life-threatening experiences. An increase in the trips in the sea, quest for more information about the marine life and simply curiosity has caused a surge in the number of such deadly encounters. A lot of people die just because they believed they could handle the depths of the ocean and will be able to rescue themselves if a shark comes with an offensive intention. However, the reality is different, and the curiosity can lead to some regretful consequences.

Recently, a skeleton is found near the Seto Inland Sea where the ground was dug for archaeological studying. This skeleton of a man is said to have encountered a shark attack 3000 years ago and he may be the oldest prey of a shark attack known to mankind. The deep study of the remains revealed that it had to bear around 800 deep wounds which never healed. This means that the person died of the attack.

Most common areas of injury were hands, arms, chest, and abdomen. The patterns and marks left exhibit an attack by a wild animal, most probably a shark. His left hand and right leg were not found along with his body. Moreover, his left leg was placed over his body at the time of burial. This shows the savage nature of the attack he had to face. The man is said to be in his middle age, living around 1370 to 1010 BCE.

The species of shark is thought to be either a tiger shark or a white shark. No further information can be revealed on this aspect as the marks of its bite intersect each other, blurring the patterns by overlapping. It is astonishing how there are still similarities in predator-prey relationships from the early eras and present day. The entire informative article can be read in the Journal of Archeological Science: Reports.