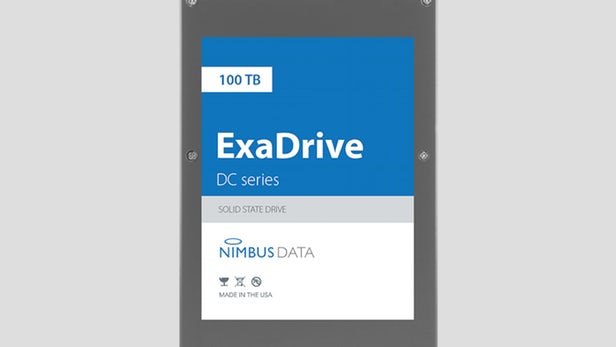 Samsung recently revealed the latest record-breaking SSD with a capacity of 30 TB in a 2.5-inch drive format. The company was unable to hold the record for long as Nimbus Data has set a new benchmark by launching the ExaDrive DC100, which is a 3.5-inch SSD drive with a huge capacity of 100 TB.

However, it does not focus on ultra-fast read and write speeds as Samsung does and focuses solely on the storage capacity. The ExaDrive can only reach 100,000 IOps (read or write) and up to 500 MBps throughput. These are relatively modest stats. But, the drive is aimed towards enterprise customers who are looking to cut down on rack space and power costs.

The ExaDrive DC series will be coming to the market sometime later this year. Nimbus Data is only sampling the product as of yet and the price has not been revealed.  looking at the precedent set by the company, it is safe to assume that it will be quite a hefty sum in the beginning.

Thomas Isakovich, CEO and founder of Nimbus Data, says that the power efficiency of the drive means it will draw 85 percent less power per terabyte. For a company dealing in big data, this should make the ExaDrive relatively competitive despite the initial cost.

Even though it is only aimed at giant corporations and data centres, it is a new benchmark that has been set by the company and other companies will aim to at least match this if not exceed it. This is a never-ending race and we will see newer and newer models released every year.