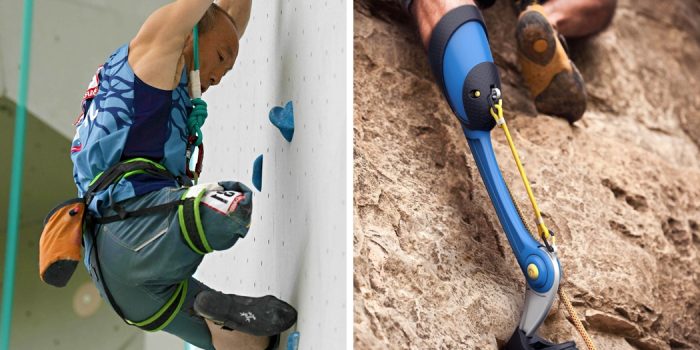 Hard times reveal the best part of you, it makes you think of the impossible because rock bottom teaches you that nothing worse can happen now, and all you can do, will somehow take you forward. Keeping the spirits high, DeMartino, an adaptive climber, didn’t give up after surviving a 110-foot fall that not only injured his neck and spine but also took away his right leg. His life goals took a turn and he aimed to help similar people still make the best out of their lives. So, he started his work on prosthetic limbs. Though, he had to largely rely on someone with a technical background.

His story crossed the path of an industrial engineer, Kai Lin, who partnered with DeMartino to work on a prosthetic foot. The inspiration came from mountain goats and the idea was to replicate their foot design to make them adaptable to mountain climbers.

After dint of hard work, in 2014, KLIPPA (Swedish translation for “cliff”), Kain Lin’s product, qualified for the final round of James Dyson Award. The design got attached to DeMartino for publicity purposes, but still, a working prototype lacked funds and resources. The constraint didn’t stop him and he kept on searching for dimensions in which he could improve the draft design. He was open to feedback and criticism by fellow designers, prosthetic leg users, and mountain climbers. His aim was not an invention merely for fame but, to help out the disabled.

In order to make it a realistic one, he was ready to step into the shoes of a climber and further improve his work. “I think looking at this problem with a unique set of eyes allowed me to come up with a design that a professional rock climber might not have.”

When one puts his soul to work, the universe conspires to make the dream come to. And the same was the feelings of this engineer years after, “Little did I know that the idea would turn into years of research and development and so many opportunities, I can design specific things that will make people’s lives better through the objects they interact with on a daily basis. That’s what I’m good at. And that’s something I can do.”

This one is a true example of putting science into good use that adds to the world in a practical way. It gives a great lesson that dreams can be achieved with pure intentions, strong will power, determination, and the go-get-it attitude. There are numerous similar stories where technology was used to bring meaning to a suffered life.