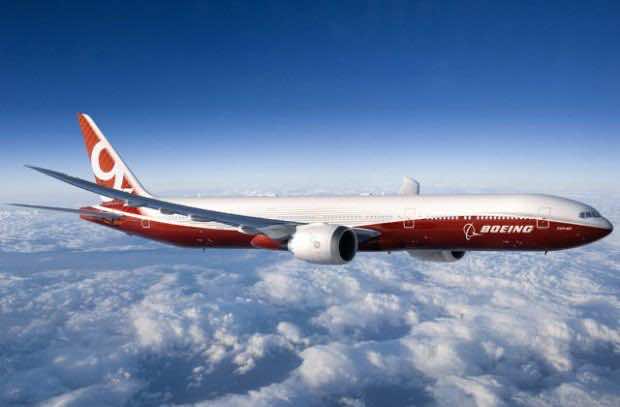 Fuel-efficient cars are all too common in today’s modern time, but Boeing decided to make a fuel efficient airplane. In this year’s Dubai Airshow, the company unveiled the 777x, their newest airliner. The defining feature of the aircraft are the folding wings which provide an increased wingspan while in the air and hence greater fuel economy. The wings can then be folded to allow easy landing at conventional airports made for smaller aircraft with smaller wingspans.

The airplane is based on the already well known Boeing 777 with wings based on the 787 Dreamliner, having a total wingspan of 233 ft (71m). Boeing claims that the 777x will be the largest and most fuel efficient twin-engine jet in the world. The operating economics of the new Boeing will also be superior, making the airplane comparatively cheaper to run. The company also says that the new GE9X engine, made by GE aviation, will add to the fuel efficiency of the 777x. According to Boeing CEO, Ray Conner, “The airplane will be 12 percent more fuel efficient than any competing airplane.”

The company says they have already received 342 orders for the new 777x, which shows that it has already made its mark on the market. The 777x was unveiled as two models – the 777-9x and 777-8x. The 777-9x has a shorter range (15,185 km) but will have the lowest operating cost per seat of any commercial airliner, while the 777-8x has a greater range (17,220 km). Our roads are already becoming more and more fuel efficient, but with the 777x, so will our skies. Images of the new model can be seen below. Folding wingtips of the 777x The GE9X Engine by GE Aviation

The GE9X is the most advanced commercial jet engine