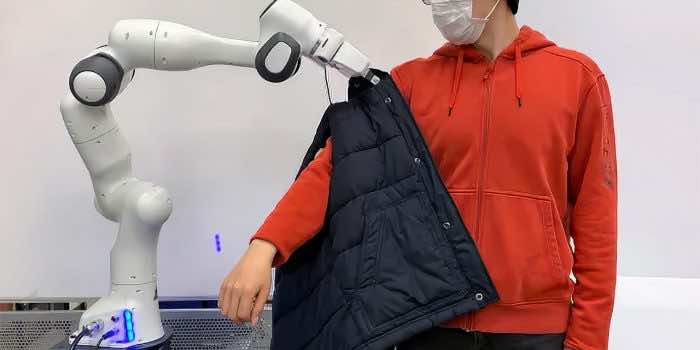 Robots are already capable of doing tasks such as lifting goods that are too large or inconvenient for humans to handle. Another use for which they are specifically tailored is the precise assembling of objects such as watches, which include a significant number of microscopic components, some of which may be so minute that they cannot be seen with the human eye. The development of algorithms to avoid physical injury without unduly affecting overall productivity is a major problem. “Our technology can identify effective robotic pathways to outfit humans with a safety guarantee by letting robots have non-harmful impacts on people,” explained Shen Li. MIT researchers indicated a robotic arm gripping a vest with the human’s right arm through the armhole, which is then gently dragging upward to the shoulder. A YouTube video of the demo contrasts how much faster the arm is compared to a typically constructed technique.

Everything gets much more challenging when a robot needs to engage with a person and collaborate to securely and effectively accomplish the job, says Shen Li, a Ph.D. candidate in the MIT Department of Aeronautics and Astronautics. The algorithm includes a vibrant framework for predicting how the arm will move in the future, and each forecast is rectified by a calculation of the force applied to the fabric at a given moment. While other scientists have made condition monitoring forecasts of this type, the MIT researchers and their collaborators can establish a clear absolute limit on the ambiguity and ensure that the elbow will be somewhere within a stipulated box.

In this scenario, the robot-assisted in putting a jacket on a human, indicating that it has the ability to be an effective instrument in increasing support for individuals with impairments or restricted mobility. The team’s algorithm considers the ambiguity in the human model to give a hypothetical assurance of human health and safety. Rather than selecting a dedicated default model in which the robot only knows one conceivable response, the researchers provided the machine comprehension of numerous distinct models in order to more precisely replicate how people comprehend other individuals.

The immediate goal is to keep a human being from being in a dangerous position. A robot must be cautious at all times in order to prevent accidents with people or to mitigate the repercussions of such incidents. According to Li and colleagues, “to the best of our knowledge, this is the very first effort to establish a statistical safety assurance concerning human mechanisms modeling with unpredictability for human-robot systems.” If the arm is straight, the robot will go in a straight and narrow path; if the arm is bent, the robot must curve around the elbow. He says it is critical to have a trustworthy image. “If the elbow assessment is incorrect, the robot may choose a motion that produces an unnecessary, and potentially dangerous, force,” Stouraitis explains.

According to an MIT researcher, the significant difference in the latter example is due to “visual obstruction.” “During the whole clothing procedure, the robot cannot see the human arm.” This, in turn, influences the amount of effort needed by the robot to move a piece of clothing, such as a long-sleeved shirt, from the hand to the shoulder. To address the problem of impeded vision, the researchers created a “state estimation algorithm” that allows people to make justifiably accurate and consistent broad assumptions as to where the elbow is at any given time and how the arm is compelled whether it is stretched straight out or bent at the elbow, attempting to point upwards, downwards, or sideways even when it is entirely covered by clothing.